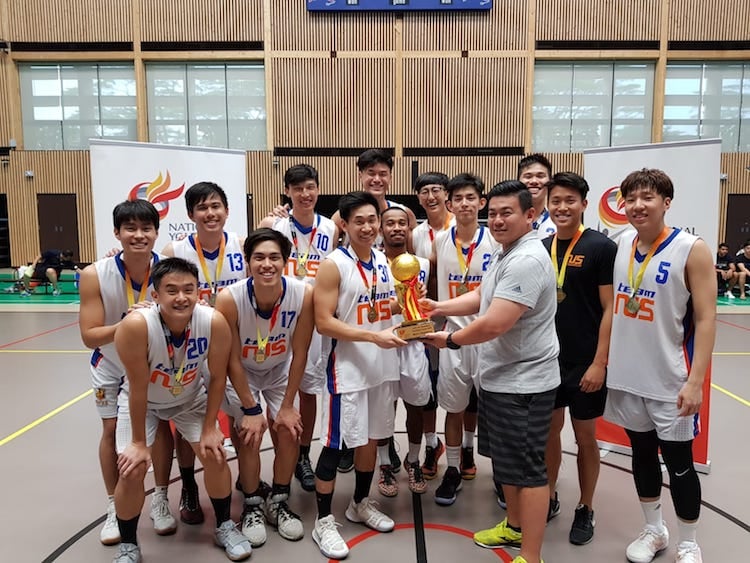 Team NUS posing with the NYSI Basketball League trophy after their win against NTU. (Photo 1 from reader)

The league, now in its second year, saw nine tertiary teams, together with ACS Oldham, battle over two months for the championship.

NUS came into the finals after going unbeaten in Group B play. NTU also topped their respective group despite dropping a game to Singapore Institute of Management (SIM).

The game began explosively for NUS as they jumped to an early lead courtesy of their accurate shooting from beyond the arc. Sharpshooters Keith Zhang and Han Jun Seo, both knocked down three-pointers in the opening minutes off some smart offense by the visiting team.

NTU also had no answer for NUS point guard Rolu Oyekanmi, as he used his quickness to consistently break down NTU’s defense and find his open shooters.

NUS scored four three-pointers in the opening 10 minutes. NTU, on the other hand, were severely hampered by the 2-3 zone deployed by NUS, which limited the effectiveness of their big men who traditionally scored the bulk of their points.

NUS jumped to a commanding 23–10 to end the first quarter.

The second quarter was a low-scoring defensive slugfest. Lyon Chia used his incredible athleticism to score the bulk of NTU’s points through his offensive rebounds and put-backs.

NTU managed to cut the NUS lead down to 11 points before the half-time whistle at 33–22. This would be the closest they would get to NUS.

The third quarter started off with a contentious moment as Max Ong of NUS threw the ball at the head of an NTU player after a foul. This led to his automatic ejection and some shoving between the teams, but cooler heads prevailed, and the game continued without much fuss.

After adjusting to the NUS zone defence, Darryl Kai of NTU dominated the post with a series of strong moves as his squad attempted to claw away at the lead. This proved to be futile, however, as they could not stop the hot shooting of NUS. NUS scored an impressive five three-pointers in the third, pushing the lead to 56–40 at the end of the quarter.

Heading into the fourth, NTU attempted to come back into the game, but crisp play and strong defense by NUS shut the door on their efforts, and the visitors ended the game strongly, outlasting the home team 71–56.

“I feel that we could have done alot better on defense and our overall energy level throughout the game was low,” mentioned NTU Captain Brian Wong.

He added, “We have to touch up on our weaknesses for the coming SUniG (Singapore University Games). The NYSI League has given us the chance to rectify any mistakes our team might make.”

It was all smiles for NUS vice-captain, Johrathan Cheok, who commented, “It feels awesome to win the league. This league really prepared us for the upcoming SUniG. To win against high level competition such as NTU really increases our confidence for future competitions.”

He added, “The NYSI League has given us the perfect opportunity for us to explore our newer players.”