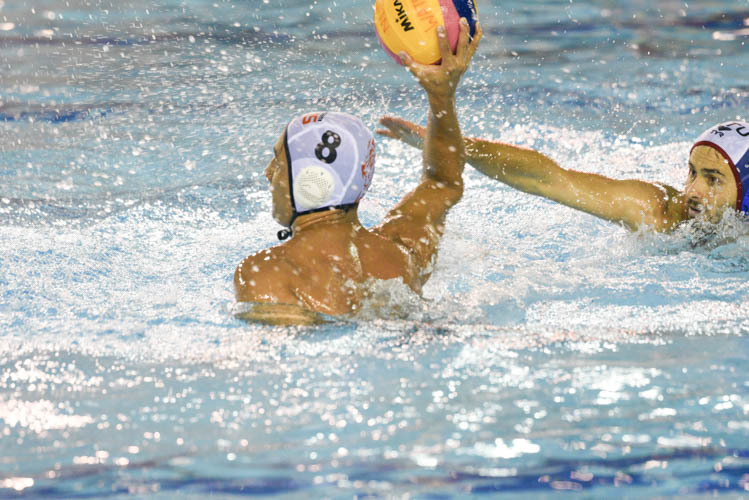 Daryl Ho (NUS #8) scoring one of his goals during the match. (Photo 1 © Stefanus Ian/Red Sports)

The boys in white blitzed the visiting team 8-1 in the first quarter with high pressing and pressure tactics as Daryl Ho (NUS #8) led his team in scoring with a total of seven goals. NTU attempted to mount a comeback in the second quarter, outscoring NUS 4-2, but eventually could not sustain their momentum as NUS closed out the second half.

“On our part, we kind of lost focus after the first quarter, I think our complacency was to blame and our focus was not there,” said NUS skipper Bryan Ong after the match.

“This game is not a true reflection of our capability as a team, I think definitely we have a lot to improve on in terms of our mentality,” added the 22-year-old, who also played for the national water polo team.

NUS displayed their strong stamina, even from the initial sprint and with the way they pressed even beyond their half-court. The home side wasted no time, putting the ball into the net within the first 30 seconds of the game.

The NTU team was also unable to cope with the fast counter attacks that NUS deployed after that and it took them awhile to settle into the game.

But after outscoring the home side in the second quarter, NTU were unable to carry that momentum as NUS regained control in the second half and closed out the match.

While he expected a tough match against NUS, NTU’s coach Tan Chong Hong said he also wanted to use the match to blood in his newer players — some of whom only started playing water polo in university.

“For the first two quarters, I tried to roll out half the team with senior players and two or three younger players. And for the third and fourth quarters, we tried to put in our stronger players,” explained Tan, 42, after the match.

“So that everyone has a chance to take part and play.”

With this result, NTU has one win out of three matches and will play against Nanyang Polytechnic next on Monday, July 9, while NUS will look for their fifth consecutive victory in their next match against Republic Polytechnic.

[Editor’s note: Please take note that the names on the rosters and scorers that you see above are taken from the handwritten information reflected on the water polo match sheet, so please write legibly to avoid any misspellings of names and information. If you have any information about the rosters, please comment below and we will adjust accordingly.]