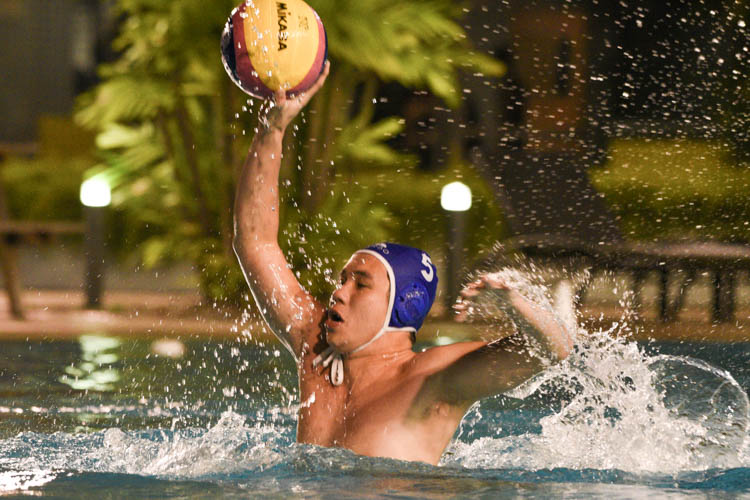 Ang Wan Loong (SMU #5) scoring one of his nine goals during the match. Singapore Management University coasted to their first win of the season with a strong 19–4 win as Nanyang Polytechnic slump to their fourth defeat in four matches. (Photo 1 © Stefanus Ian)

Having lost against NUS in their previous match, SMU returned to winning ways as they recorded their second victory in their third match with Ang Wan Loong (SMU #5) leading the way with nine goals. The SMU captain said it was a “decent match” for his team, who turned up with only one substitute.

“We have less than 13 players in our squad so whoever comes will be whoever that plays,” said Wan Loong frankly after the match.

“It wasn’t too bad a game, the opponents were decent,” he added.

NYP started brightly taking the lead with their first goal through Lam Bao Jie (#4) within the first minute. But their unexpected lead was short-lived as SMU duly replied with six consecutive goals before Kenneth Lee (NYP #12) made it 6-2 to close out the first quarter.

SMU then controlled the game comfortably after their strong first quarter performance, slowly but surely extending their lead against the home side. Compared to their previous matches, NYP looked more energetic and managed to pull another goal back in the second quarter but SMU’s experience separated the two teams as they remained calm.

“Everyone’s quite experienced so when we come together we can play but just our fitness level couldn’t really catch up,” said Wan Loong, adding that he had a few ex-national players in the squad.

For NYP, the defeat leaves them bottom of the table and while the defeat margin was large, the newly formed team seems to be improving slowly. NYP’s goalkeeper Darrell Tay (#13) was one of the players that had some positive moments during the match, providing some point-blank saves during the last quarter of the match.

Despite his saves, Darrell is not getting carried away.

“There’s nothing I should be too happy about, I am supposed to save the balls, it’s my job,” said the 19-year-old.

“The whole team, we don’t care about the losses, it’s more of a learning experience because most of them are also very new,” he added

“I think there are still a lot of improvements to be made.”