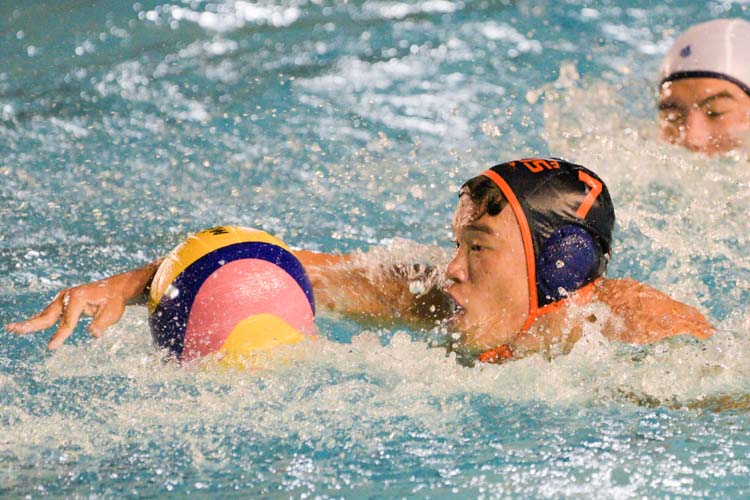 The dominant performance allowed NUS to rotate their players and give everyone more playing time. But the substitutions turned out to be more of a necessity, especially with NUS coach Billy Martin, feeling that his team was not in their best shape.

“You could tell that we desperately need better conditioning. Our guys look very tired,” said the 65-year-old coach, who is also a professor of medicine at NUS.

“The score does not represent what was going on in the game.”

The boys in blue took their time out of the blocks, scoring their first six goals in the first quarter. Their sharp offense was uncharacteristically wasteful at the start as they hit the frame of the NYP goal and missed close-range shots.

But even then, it was one-way traffic during the match as NYP struggled to match the speed and physicality of the NUS players. NUS skipper and national player Bryan Ong (#7) finished with seven goals while Daryl Ho (#8) put six into the net. Justin Chia(#5), Eldon Ng (#6), Gerard Low (#2) and Toh Han Wei (#12) made up the rest of the goals.

NYP managed to put up a fight early on through Kenneth Lee (NYP #12), who replied with a goal in the second quarter to bring the score to 10-1. He also converted a penalty towards the end of the match to bring his goal tally to two.

Despite the heavy defeat, NYP’s vice-captain Joshua Tan (#2) remained upbeat after the match.

“I think we did quite well for the standard as you know NUS is a very experienced team with a lot of national players, whereas our team only has four to five players that have experience while the rest of the team is very new to the sport,” said the 18-year-old student.

“(For these new players) this is their actual first match,” said Joshua, who also scored NYP’s two goals in the match.

“I think this tournament is good for us to learn how each other plays, our styles so that we can get ready for our POL-ITE games.”