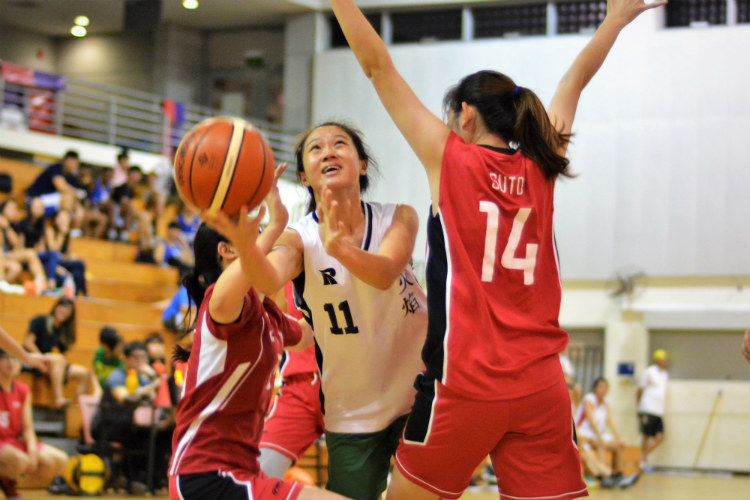 NYP Sports Hall, Thursday, June 15, 2018 — Nanyang Polytechnic (NYP) came up clutch down the stretch to survive the comeback efforts of Singapore University of Technology and Design (SUTD) and take the game 41-31 in the National Youth Sports Institute (NYSI) Basketball League.

NYP got off to a strong start. They went on a 10-0 run before Yeoh Chuen Wen (SUTD #21) made a rebound put-back to score the first points for SUTD.

NYP were able to hustle for many loose balls and played good defense to force several turnovers. Despite those, they were not able to capitalize on the opportunities to increase their lead. NYP were up 11-02 after the first quarter.

In the second quarter, SUTD got rid of their nerves and started to play more smoothly. Despite several baskets by NYP, they were able to counter with Sng Ei Jia’s (SUTD #14) effective post moves. She scored six of SUTD’s eight points in the quarter.

While NYP were making their shots, SUTD continued to fight hard. Chuen Wen (SUTD #21) hustled for several loose balls to give SUTD several offensive opportunities and Oh Xi Yu (SUTD #17) was able to capitalize as she knock down mid-range jumpers after jumpers to cut into NYP’s lead.

Being the more experienced team, NYP did not let those affect them and continued to play on calmly. They carefully executed their offense and were able to stay ahead. NYP eventually secured their first win of the season against SUTD.

Gladys Ng (NYP #10) added, “We were able to keep calm even though SUTD were catching up. While there was some injury during the game, we didn’t retaliate as we knew it was unintentional. Our shots selection was not bad as well. We took more outside shots as their (SUTD) defense was pretty tight and they boxed out well.”

SUTD captain, Chuen Wen (SUTD #21), said, “They played a very specific type of defense that we weren’t used to. It was a bit difficult for us to adapt during the game. We got to learn on how to break this full court press after this game. We also need to adapt on our offense and learning how to defend as we were trying out different defense tactics. We have to find out the lapses in our defense and how to make it better. Normally the point difference is very big during the game, but when we saw that there was a chance, the point difference was significantly smaller so we worked extra hard on our defense and it paid off well.”