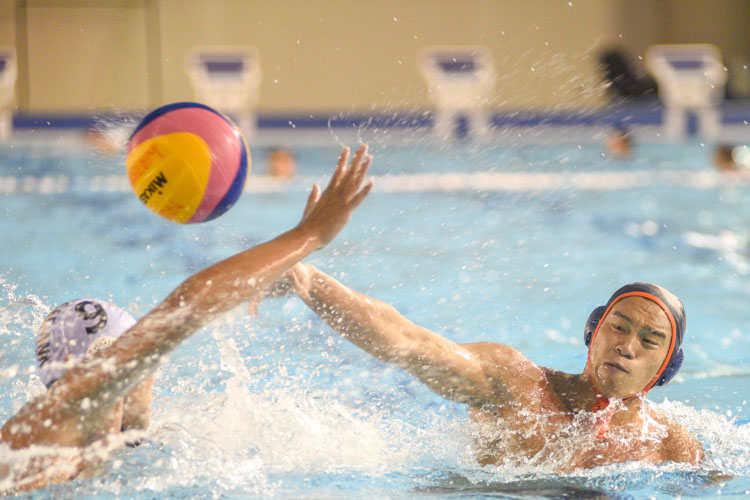 Playing at their home pool, the boys in blue did not waste any time racing to a commanding 9-2 lead against the visitors within the first two quarters before continuing their dominance throughout.

NUS captain Bryan Ong (#7) said he felt his team “played quite decently” against their opponents, adding that their attack took a while to get into gear.

“As the game progressed, and we started to wake up a bit more I think that’s when things started getting better, our attack was a bit stronger as well and we started finishing our shots,” said the 22-year-old.

The win was a confidence boost for the team and Bryan said the team is taking the tournament seriously.

“I would say (this tournament) is important because our team is currently rebuilding… For our squad, we are really young and I think this is an important tournament for us to gel together,” said Bryan, who said that for some of the NUS players it was their first time playing together with the team.

In the first quarter, NUS focused their attack down the left flank and stretched their lead quickly through Darren who scored within the first minute of the match. Combined with Daryl, the two players racked up seven of NUS’ nine goals in the first two quarters.

With a comfortable 9-2, NUS settled into the game and was controlling the pace of the match — varying their attacks between fast long passes and slow calculated attacks when they need to.

Ngee Ann Polytechnic simply could not keep up physically and struggled to settle into any rhythm in the opening quarters. Their passes were often intercepted as they kept turning the ball over to the home team.

It was only in the third quarter that the boys in white manage to find their passes and begin threatening NUS’ goal. Two minutes into the third quarter, Don Tan (NP #6) finished off a string of passes with an emphatic goal to score NP’s third goal.

But alas, NP’s revival was too little too late. Although they managed to score three more goals in the final quarter, NUS thumped in six to clinch their first victory of the season. Despite the loss, NP’s coach Alvin Lee said it was not a bad performance for his boys, considering that they had no prior training having just finished their examinations.

“There were a few six-on-five (drills) that they needed to do and they performed what I wanted… it’s just that we are not fit, totally not fit,” Lee said after the match.

But Lee believes that the tournament, which is the first water polo league of its kind during this period of the year, will benefit his boys a lot.

NUS will face Nanyang Polytechnic next while NP will play against Nanyang Technological University next on Monday, June 18.