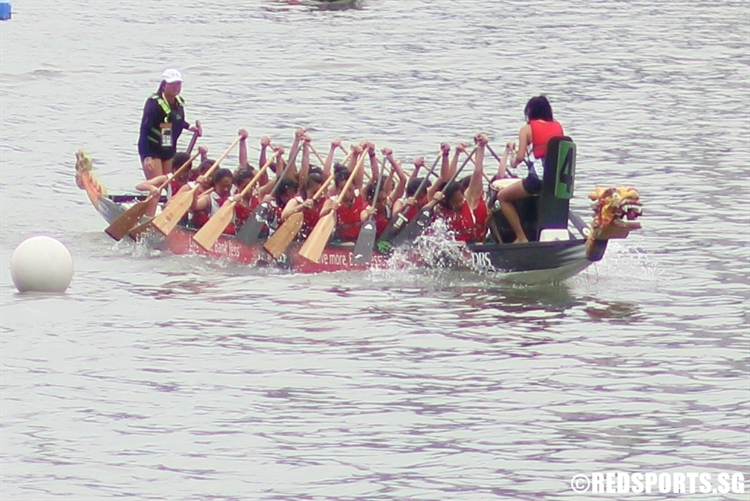 NJC, who boasts a long illustrious dragon boating history of national and world champions, had gone virtually unchallenged in all their races. And so it came as little surprise when they were eventually awarded the Girls’ Challenge Trophy for their effort.

This was the first year the Challenge Trophy was awarded for both the Girls’ and Boys’ Divisions.

“It was a really good performance because we were going up against schools that we hadn’t raced against before and were racing with a crew that included paddlers who had no prior experience in dragon boating… Everyone worked hard to get to where they are,” explained NJC team captain Chang Shi En.

She continued: “We wanted to do our best, race our hardest and leave everything on the water.”

They certainly did. Though they opted for short strokes, their quick cadence left their opponents trailing in their wake from start to finish.

For each event, teams participated in two races – Rounds 1 and 2 – and were ranked based on their combined finishing times in both rounds.

Round 2 was seemingly a repeat of the first, with NJC building a solid lead to finish three-quarters of a boat length ahead of the second boat. This time, though, it was Raffles Institution’s (RI) Team B that crossed the line next, posting a time of 1:07.185.

However, the RI team had collided with the MJC side and did not have their time recorded, effectively ruling them out of medal contention. As such, the SJI and MJC bagged the Silver and Bronze respectively.

SJI’s team captain Elizabeth Tham shared: “We were a bit shaky in Round 1 and our timing wasn’t in sync. After that, we pulled ourselves together and just focussed on our sets and on every stroke, making sure that our strokes were efficient and executed with proper technique.”

“We’d been training so hard together, so we really wanted to enjoy the fruits of our labour and ensure that our trainings were worth it,” she continued, speaking of how her team had undergone an intensive six-week training programme, which included training three times a week.

RI had come a long way to clinch the Silver as well.

“A lot of us have no prior experience in the sport and some even had no sporting background at all. We had to adapt quickly, pick up the strokes and learn to work together as a team – one of the most integral parts of dragon boating,” said Loo Zen Yee, captain of the RI team.

But it did seem that the other schools had much catching up to do. After all, NJC were in a league of their own.

Perhaps what set NJC apart was their hunger and fighting spirit on the water, as NJC’s other team captain Celeste Lee would know.

She said: “One thing we said to everyone before our race started is ‘aggression’, because we wanted to bring out the fight in every one.”