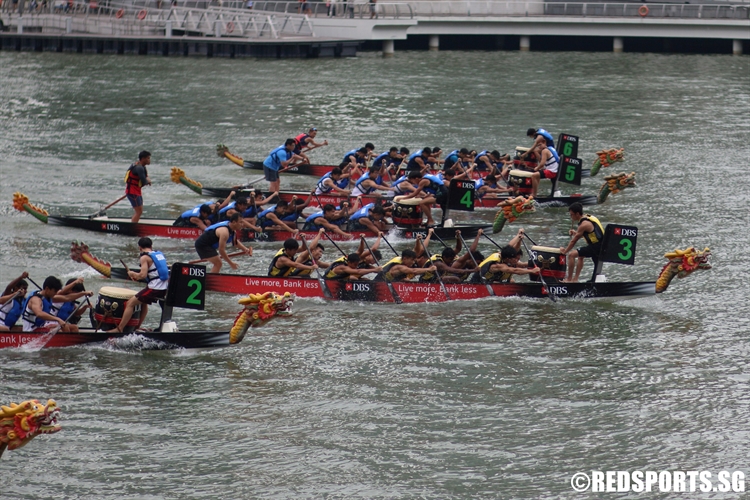 Their solid performance in both the 22-Crew (DB22) and 12-Crew (DB12) events meant that they were the winners of the maiden Boys’ Challenge Trophy, which was awarded to teams for the first time this year.

Needless to say, team captain Bryan Tan was proud of his team’s remarkable performance on the water, but was sure to show appreciation for his school’s support.

“We are grateful for our school’s support because even though sea training sessions are very expensive, the school has been willing to invest a lot of money into them so that we have the chance to train,” noted Bryan.

But it was more than a matter of putting in the hours on water, particularly for the DB22 team.

They had to dig deep and bounce back from a disappointing finish in Round 1 of the competition, especially since the overall ranking was determined by a combination of teams’ finishing times in both Rounds 1 and 2.

They had secured an early lead the race, but National Junior College (NJC) set a blistering pace in the second half, coming from behind to steal their lead in the final moments of the race.

“We didn’t come in first (in Round 1), so after the race, the team was quite demoralised. As the captains, we encouraged them to give their best for the next round and remind them not to be affected by the setback,” shared Amos Sng, NJYC’s vice-captain.

And so they did.

Fatigue often sees teams post a poorer time in Round 2, yet that very race saw NYJC’s DB22 team better their previous effort by almost half a second. Although Raffles Institution (RI) recorded the fastest reaction time, NYJC’s impressive work rate quickly put them in the lead – one that they finally held on until the very end.

NYJC eventually edged out NJC with an overall combined time that was a mere 0.234 seconds faster than their rivals. RI finished in third place.

Despite suffering a narrow defeat, NJC’s captain Rouvin Erh was pleased with his team’s strong showing.

“The sets were good and everyone was coordinated. I think – regardless of what the results are – what matters is that we did our best,” he said.

NJC’s other team captain Brandon Yeo added: “We were just aiming to prove ourselves and make sure that what we showed on water… was representative of the effort we put in. We are happy as long as we did our best.”

Meanwhile, NYJC’s victory in the DB12 event was much clearer – they went into the Finals with the fastest qualifying time and lead the race from start to finish.

Since there were more than six entries in the DB12 event, the top six teams qualify for the Finals are ranked according to their finishing time.

RI had posted the second-best qualifying time but failed to replicate their earlier success, finishing a dismal fifth.

“The coach was telling us that as long as we hold on, we will do well. But there are things out of our control like fatigue and the waves in the river. We tried out best, and although it wasn’t what we wanted, we’re still satisfied that we gave it our all,” said RI’s team captain John Fu.

It was quite the opposite for St. Joseph’s Institution (SJI), as they managed a good pace throughout the race to clinch the Silver, despite qualifying for the Finals in fifth. NJC’s Team B bagged the bronze.

Although they eventually went on to dominate the podium, Champions NYJC had their fair share of pre-race jitters too.

“We were quite nervous because the other teams, like RI and NJC, are very good and it’s our first time racing, but we didn’t really care. We just kept pushing throughout the race,” Bryan explained.

Amos concluded: “I told the team that we’d trained so hard for this race, so we should put in all we’ve got to achieve our goals. It’s a well-deserved win.”