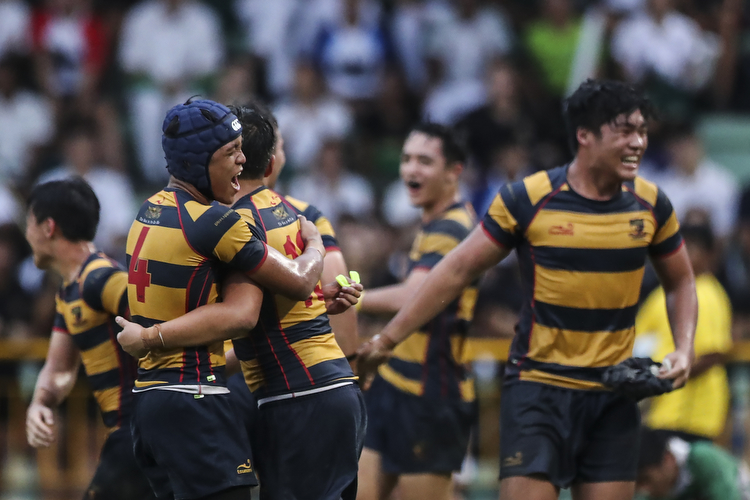 The ACSians scored all 26 points in a dominating first half performance, while holding RI to zero. ACS(I) scored four tries through Shane Duggan [ACS(I) #15], Benjamin Lim [ACS(I) #2], Josh Quan [ACS(I) #11] and Matthew Robinson (#9), who also added three conversions. RI threatened a comeback in the second half with two converted tries, but it was all a little too late.

“I was just telling myself: ‘It’s your last game, give it the best you can, if not you’re going to regret it.’ I’ve been playing for twelve years and I wanted to end it well,” Matthew said.

ACS(I) defeated their long-time rivals 12-3 in last year’s final and 22-20 in a preliminary round-robin match earlier this year. They went into this year’s final on the back of a 6-0 win-loss record, certain that they could maintain their streak against the boys in green.

“When we came onto the field, we were confident of just going out there to win the championship trophy and that was all we had on our minds,” said ACS(I)’s captain Ian Teh [ACS(I) #6].

“The mindset was to keep it simple, to keep it to the basics and fundamentals,” Ian added. “We wanted to play our normal game, without feeling nervous or anything. I told them: ‘If you make a mistake, it’s okay, we’ll just get back at it and keep on going until the final whistle is blown.’”

ACS(I)’s first-half domination was made possible by the valiant effort of their forwards, who always seemed to find a way to prevent RI’s advance. Forcing a number of turnovers, the boys in blue, red and gold were able to make good progress up the field.

A high tackle by the RI side awarded ACS(I) their first penalty attempt, though Matthew was eventually unable to send the ball through the posts.

Nevertheless, ACS(I) remained unfazed and followed up with a try by Shane [ACS(I) #15]. This time, Matthew rose to the occasion and delivered his first conversion to make it 7–0. He subsequently added a try and two more conversions to emerge as the top scorer of the match.

While the sturdy defence by ACS(I)’s forwards made sure that RI never got the ball close to the try line, the latter was unable to find much success in holding their rivals back. With their blistering pace, Benjamin [ACS(I) #2] and Josh [ACS(I) #11] found a way past RI’s defence to score a try each, closing the first-half with a scoreline of 26–0.

Those 26 points, however, were to be all of ACS(I)’s points in the game.

RI came into the second half firing on all cylinders, stripping the ball from ACS(I) multiple times to halt their swift assault up the field.

ACS(I) had a total of three chances to score again in the second, but their poor ball protection led to turnover after turnover. With that, RI took the opportunity to slowly inch their way towards the try line, and finally, score.

It was Gideon Kee (RI #7) who first found RI’s try zone for their first points, and with Bervyn Wong (RI #18) converting after, the score would be 26–7.

Gideon’s offensive production also translated over to the defensive end, with a huge run saving an ACS(I) try which would have all but decided the game.

Another great run by Jediel Yew (RI #13) saw RI move the ball up, and not long after, Russell Quek (RI #20) would get across the try line for another score. Two more from Bervyn would cut their deficit to 12, but alas, that would be RI’s final score.

In the end, a game of two halves saw ACS(I) maintain their stranglehold of the Police Cup, with their fifth straight championship title, cementing their status as the top dogs.

After yet another unsuccessful attempt at dethroning their rivals, the Rafflesians were visibly disappointed. However, RI’s captain, Zuriel Chua (RI #12) was quick to commend his team for their determination.

“ACS(I) really turned it on in the first half… They started off well, they came to play, they wanted it more, and they got what they deserved. But kudos to the boys, we didn’t give up. With four tries down, we came back to two tries… Excellent spirit from both teams and a good game of rugby, that’s all I can say,” he shared.

This is Zuriel’s final year on the team, and if there was anything he took away from this last match, it was a reminder to fight till the very end.

“It’s not over till the final whistle blows,” he said. “No matter how many tries down you are, don’t give up, keep playing to the whistle, anything can happen.”