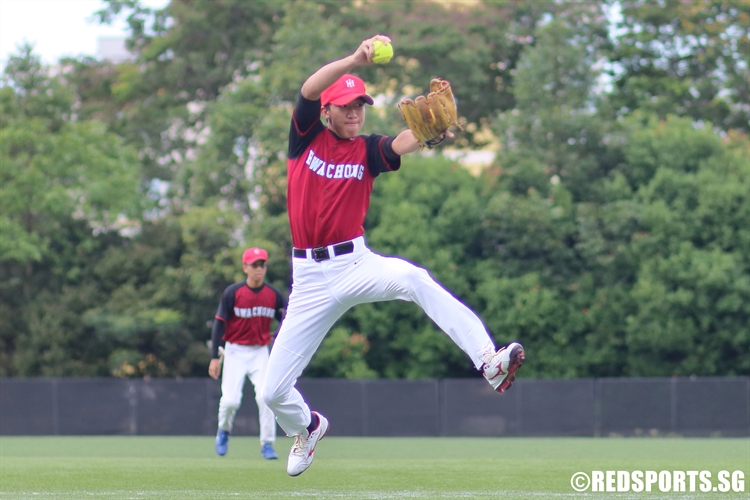 Raffles Institution, Friday, May 11, 2018 — In a game dominated by two equally formidable pitchers, one run was all that made the difference, propelling Hwa Chong to the finals. ACS(I) finishes their season in 3rd place.

Needless to say, it was an extremely important match for both teams. Having met each other before in the preliminary rounds, each team knew what the other was capable of.
“It is the match we have been waiting for,” commented ACS(I) Captain Gabriel.

The most valuable players of the match were definitely the pitchers from both team, Hwa Chong’s Aloysius (HCI #08) and ACS(I)’s Calvin (ACS(I) #06). Most batters could not hit well against them. Some could not even touch their ball. With the backing of their fielders, it was hard for both teams to score or even get on base.

This resulted in the scoreline staying level at 0-0 in the first three innings, with no one even making it to 1st base. Despite this, there was still commendable hits made. Silas (HCI #02) made a pop to shortstop while Congzhi (HCI #48) and Chiang (ACS(I) #28) managed to make hits to 2nd base. Gabriel (ACS(I) #13) and Tan (ACS(I) #09) also made good fouls but unfortunately could not convert them to hits. Janesh (ACS(I) #69) almost made it on base with his bunts which were sadly declared to be fouls.

In the 4th inning, Silas (HCI #02) was the first up to bat for HCI. On his 3rd strike, he made a nice hit straight to centre field which scored him the first base of the match. In order to advance him, the next batter Anthony (HCI #49) made a sacrifice bunt which allowed Silas (HCI #02) to reach 2nd base. Unfortunately, Silas (HCI #02) was ultimately called out while trying to steal to 3rd base as he slid past the base, allowing ACS(I) 3rd baseman to tag him out. Yet, with a bit of luck on their side, another opportunity to score came when Joshua (HCI #13) was given a walk. He was subbed out and replaced by Silas (HCI #02) who redeemed himself when he successfully stole to 3rd base and home when ACS(I) pitcher Calvin (ACS(I) #06) conceded wild pitches.

ACS(I) was really determined to at least tie the score during the bottom half of the inning, as seen from how three out of the four that went up to bat managed to hit the ball. Unfortunately, it did not translate to any runs scored as the Hwa Chong fielders kept their composure and successfully defended their attacks.

In the 5th inning, Hwa Chong could not increase their lead despite receiving three walks from ACS(I). However they ultimately managed to successfully protect their win, with their pitcher Aloysius (HCI #08) getting the final three outs to seal their win.

ACS(I)’s captain Gabriel (ACS(I) #13) was tearful after the match but extremely proud of his team for the game they played and contented at the journey they had been through together.

“This really wasn’t about winning for us. As in we all started out wanting to win, but we soon realised their was much more to that. There is a really great bond between us that nothing can break. And there’s so much blood sweat tears on the field that makes this bond unbreakable and we are just very happy for that.”

“None of us are really sad about this, it means a lot to us to not go to finals but it means more to us that we have done it together.”

ACS(I) ended their season with a commendable fight and finished 3rd.
Hwa Chong Institution clinched the championship title after a hard fought match against Raffles Institution in the finals on 15th May, 2018.