National A Div Tennis (Girls): RI clinch a decade of titles after 4–1 victory over ACJC 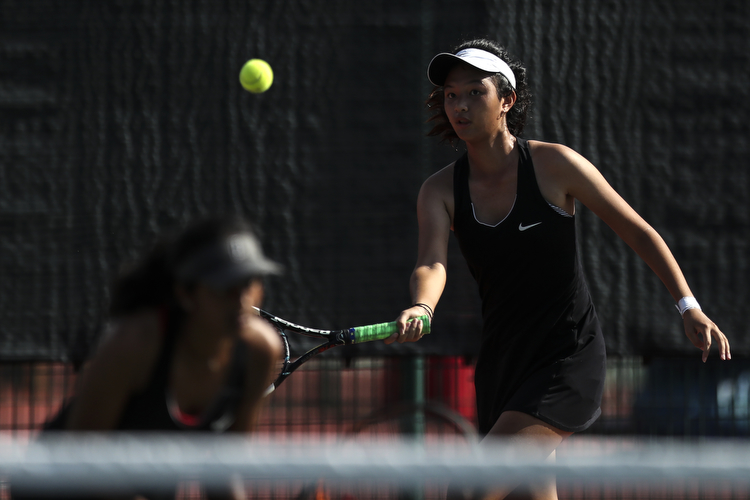 Kallang Tennis Centre, Wednesday, May 9, 2018 — The National A Division Girls’ Tennis Championship title went to Raffles Institution (RI) for the tenth consecutive year after they bagged a 4–1 victory over Anglo Chinese Junior College (ACJC) in the finals.

Needless to say, RI were the hot favourites going into the Finals. They had been virtually unbeaten since the start of the season, only losing their very first match in the Finals.

Yet, these great expectations were accompanied by the unforgiving pressure to perform.

“One of our biggest challenges was the pressure because there are expectations that we’ve to meet. It’s about managing our emotions, making sure we don’t think about the expectations and just performing our best,” explained RI’s captain Meg Ang.

ACJC were not without their fair share of challenges as well. They were a relatively newer team and had to build up the trust amongst themselves.

ACJC’s captain Elizabeth Lee shared: “Confidence was something we had to build up, especially with the first-year students who just (joined the team). As we progressed, I could feel that the new team and new environment was making everyone nervous, so we really had to calm one another down through all the matches we played.”

ACJC Captain Elizabeth Lee took the first singles with a double-bagel over RI’s Tamara Tan, and the second saw RI’s Jeovanne P. dole out another double-bagel to ACJC’s Natalie Tan.

In the second doubles, RI Captain Meg Ang would partner up with teammate Sin Suwen for a 6–4, 6–1 win over ACJC’s Sarah Teoh and Violet Lee. The final singles match would see Tammy Tan seal the Championship for RI with a 6–2, 6–1 victory over ACJC’s Nadine Loh.

Her sister Natasha Loh, on the other hand, teamed up with teammate Chelsea Wee for the first doubles, arguably the most exciting match of the final. The ACJC duo took on RI’s tried-and-trusted pairing of Shirina Mulani and Laura Chan, whose impressive chemistry was a result of their five-year partnership on the court.

RI took the first set in their usual fashion, with their decisive net play paying off against a hesitant ACJC 6–3.

However, the second set was not as smooth sailing for RI. Easing their foot off the gas, they let their guard down and that was enough for ACJC to come storming back into the match. 3–1 down at one point in the set, ACJC fought their way to 5–4 up.

RI’s Laura Chan, then, was forced to serve to stay in the set. Missing on her first serves, she let ACJC get the better of them with a score of 15–40, and with that, three set points. Eventually, RI came through despite the pressure and saved all three to even the set at 5-all.

In the next two games, there was a total of five break points: three for RI and two for ACJC. None were converted, though, and the second set went to a tie-break.

By the time it got to the tie-break, RI’s Shirina and Laura had lost their intensity after almost two full hours of play. Alas, in a tie-break, where the mental game reigns supreme, RI lost could not keep up and lost the set 3–7 to ACJC.

As the third set began, it seemed as though RI were unable to regain the intensity they played with in the first. With some careless, inconsistent serving, the RI duo was broken three times and in the blink of an eye, they were staring down a 5–0 deficit in the final set.

Recounting that very moment in the game, Laura said with a sheepish laugh: “We told each other: ‘We can’t lose like this, not this year.”

Shirina added: “We just got it together and told each other…we’re better than this, come on, we can do this, push through.”

With that, they began their comeback. A costly double-fault put ACJC’s Chelsea under some undue 0–30 stress and she folded under the pressure.

With Shirina serving and at sudden-death, the point would decide if the match would go on or come to a close. Once again, RI stepped up to the challenge.

After breaking once more, it was Laura’s turn to serve. This time, RI found themselves 15–40 down, with three match points to save. Laura came through in the clutch, duking it out on the baseline and forcing errors from the ACJC returners.

Laura explained her mentality as she saved match point after match point: “Point by point. We were just trying to keep calm and just play our normal game. It’s our last year playing so we might as well go all out.”

As Laura helped pull RI within one game of ACJC, it seemed like ACJC had lost their spirit. Earlier in the game, despite being visibly uncomfortable at the net, ACJC did their best to have someone in position up front. Now, though, both had shifted to the back of the court, playing some passive, defensive tennis.

RI took advantage, and with momentum firmly on their side, they cruised to a 7–5 third set. This third set had seen them win seven straight games and save four match points to finally end the near-three hour marathon.

Even though RI had served up a convincing victory over her team, ACJC’s captain Elizabeth was pleased with how far her team had come.

She said: “We did very well as a team, and we all played well together. Even though the odds were against us in this Finals, and everyone knew that we were the underdogs, I’m very proud of my team for putting up a very good fight.”