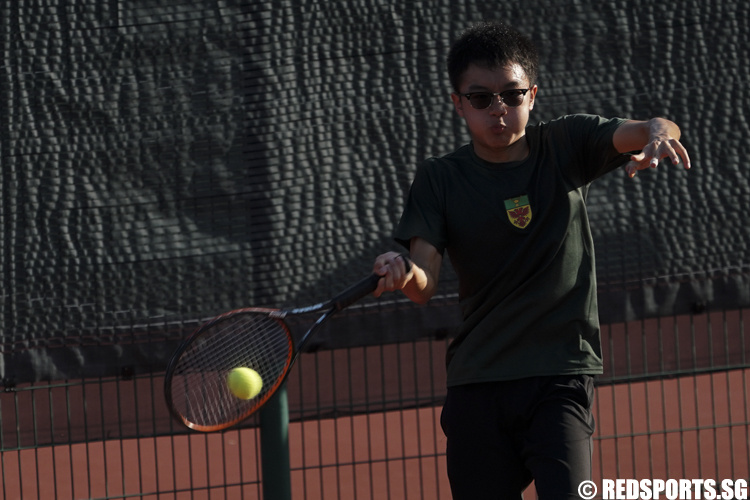 It was not the first time both sides had met on the hard courts though. Their previous meeting took place in the Quarter Finals, where ACS(I) had escaped with a similar 3–2 scoreline after being a match-point down.

The 2017 Finals had also seen an identical match-up and outcome, with ACS(I) coming out on top with a 3–2 victory over RI.

Despite having fallen short in their previous encounters, RI entered the Finals seemingly unfazed.

“Despite being the obvious underdogs, we still believed in ourselves strongly that we can cause an upset with our abilities. And seeing how hard we’ve trained, I was confident that we did have the ability to win, although it didn’t turn out very well for us,”said RI’s Park Jung Woo.

RI’s captain Aveek Goswami added: “We are not really affected by past losses… Going into the finals, we were still really confident and all of us believed that we had a solid chance (at winning) today.”

While ACS(I) had always found a way to edge out their opponents, they knew that they were in for a tough fight.

Captain of the ACS(I) team Justin Oeni shared: “When we played RI in the Quarter Finals, we were one point away from losing, so we knew this match would be just as tight… we knew it would be closer than ever.”

And indeed it was.

Both teams had strategically switched up their lineups in the hopes of catching the other off-guard. As luck would have it, both made similar changes by pairing their stronger players together in the doubles matches.

Eventually, the match that would decide it all was the second doubles.

Right from the first serve, ACS(I)’s Shawn Ng and Oliver Loo set the tone and took an early 3–0 lead over RI’s Park Jung Woo and Amos Koh with some aggressive hitting and net play.

Service games flew by and RI found themselves down 5–2. Not to be outdone, RI clawed their way back into the set and broke Shawn‘s serve for a chance to tie it up at five-all.

It then became a tight service game for RI’s Jung Woo, and although RI had chances to even the set, ACS(I) saved three game points to find themselves at a controversial sudden-death point.

With a volley, RI’s Amos Koh had put away the ball and won the point, making it 5–5 in the set. However, the umpire chose to void that point, calling a let and replaying the point as a ball had rolled over from another court. On that replayed point, ACS(I) went on to win the sudden-death point, and with that, the first set of the deciding match.

“Although we were down on the first set, we came back pretty strong and caught up until that very point. It was a fair call on the umpire’s part, but it was unlucky for us,” Amos admitted.

The second set was a chance for them to shake it off and reset, but RI failed to capitalise on the opportunity, as Amos was broken in the set’s second game for a 2–0 ACS(I) lead. Nevertheless, the RI duo came right back with a break and hold of their own, leveling the set at two-all.

However, with some exceptional serving by Oliver and a couple of error-ridden games by RI, ACS(I) went on to win the next three games to put them up 5–2 – one game away from the championship title.

Another close service game from Jung Woo, and he was cutting it very close. On a sudden-death point, with the Championship on the line, RI was able to force an error from the ACS(I) pair to hold serve. Now, for the championship to be theirs, ACS(I) would have to serve it out.

And so they did. RI fell short once again, as Shawn and Oliver delivered for ACS(I) in the decider, celebrating their victory with a chest-bump.

“We just stayed focused for every point, made it tight and didn’t give away any easy points. We didn’t want to focus on the outcome. It was all about playing well and we believed in ourselves today. We knew that if we played well, we would come out on top,” Shawn explained.

Oliver added: “We were just keeping to minimal errors, focusing on every ball, trying to get rid of the pressure just keep moving our feet. We were just hitting every ball with confidence.”

The rest of the matches were more of a one-sided affair.

In the singles, ACS(I) served up two double-bagels with Robin Cheng and Justin Oeni taking both the first and third over RI’s Sean Yun and Jonathan Teo respectively. Meanwhile, Paul Michel’s double-breadstick over ACS(I)’s Tiah Jeng Ern added another point for RI.

This championship title was their fourth but ACS(I)’s road to glory was by no means an easy one.

“We were quite anxious throughout the whole season. We had people falling sick, (with someone) even having to undergo operation, and some of our players had exams (today). There were quite a few obstacles in our path, but eventually we made do with what we had,” shared Justin.

Although a win over their rivals still continues to elude RI, captain Aveek was proud of his team.

“We put in a good fight. It came down to one tight match that was really close. We are quite devastated but it’s alright. What’s important is that we fought all the way to the end.”