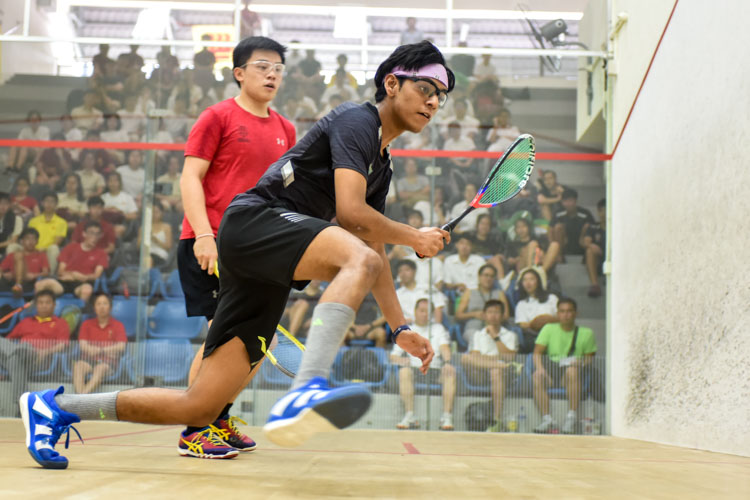 Kallang Squash Centre, Thursday, May 3, 2018 — Despite being favourites to win, Raffles Institution (RI) still came into the final under pressure to perform against a stronger and more experienced Hwa Chong Institution (HCI) team in a repeat of last year’s final.

Nevertheless, RI managed to live up to expectations taking a 5-0 win against their opponents in a similar scoreline as last year’s final.

“The performance from the boys today was brilliant,” said RI’s coach, Allan Chang. He also acknowledged Hwa Chong’s stronger team compared to the previous year. “The pressure and level of squash was higher than last year,” he added.

In spite of the scoreline, Hwa Chong proved worthy opponents for Raffles, and spectators were treated to quality squash matches throughout.

With the exception of Raffles’s Tan Izhi, all of RI’s players took down their opponents 3-0.

RI’s Rau Rutvik Bairavarasu and HCI’s Wong Zhen Xuan battled first, with the former taking the first two games 11-3 and 11-4. He then beat his opponent with a powerful forehand drive to win the third game 11-4.

In the second match, Aaron-Jon Liang of RI and HCI’s Tan Rui Zhi displayed the skills honed in playing squash for years. Aaron, who clinched the title for his school last year, took down Rui Zhi 11-3, 11-4 and 11-4, Aaron showed in this match his ability to defend the fast cross-court drive shots from the front wall.

RI’s captain Anders Ong then clinched the championship as he tired out HCI’s Su Wei Zhe in three games 11-1, 11-2 and 11-1, though Wei Zhe didn’t let him take his wins easily. In one of the rallies, Anders showed good composure after slipping and almost stretching to a full split with Wei Zhe’s attacks.

With the title decided, Izhi entered the fourth match and was expected to follow his seniors’ straightforward wins.

Izhi, who engaged in intense rallies with Hwa Chong’s Lorcan Murphy, started off well with a 6-2 score in the dead-rubber match. However, the tables started to turn as Lorcan won consecutive points.

The taller Lorcan could return all of Izhi’s powerful drives to the back court making calm precise and consistent offensive shots. Lorcan sprang a surprise on everyone when he won the first game 13-11.

“The strategy was to pressure him, to hit the ball harder,” said RI’s coach Chang on the advice he gave to Izhi after the first game. “I told him not to play at the front wall because the opponent is tall and can pick up the ball easily at the front wall.”

With his coach’s advice, Izhi could be seen picking up the pace for the subsequent games.

Both Lorcan and Izhi focused on making fewer mistakes and killing the ball such as with low and powerful cross-court drives.

Izhi managed to overcome his formidable and different opponent 11-7, 11-9 and 11-5 in the next three games.

It was also a worthy-to-watch though dead rubber match between last players Clement Hung of RI and HCI’s Kieren Tan.

In the last match, Kieren Tan of HCI and Clement Hung of RI gave an exhibition match for the spectators. Clement took the first game 11-3 with drop shots lower and more accurate than his opponents’.

Both players engaged in quality rallies and Kieren even almost caught up, pressuring Clement to a deuce in the second game before losing 10-12. But ultimately, Clement still made a 3-0 win with strategic choices of shots, closing with an 11-9 win in the third game.

Raffles thus defended their title against Hwa Chong, who last won it back in 2016. Although they failed to recapture the title HCI’s captain Wei Zhe was satisfied with their performance.

“Overall, we did well and have met our expectations for the season, getting into the finals after many hard fights against schools like ACJC and ACS(I),” said Hwa Chong’s captain, Wei Zhe.