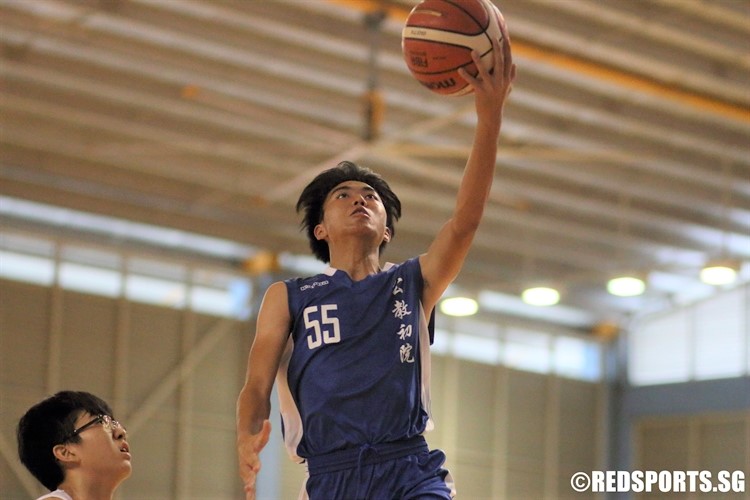 Singapore Basketball Centre, Wednesday, April 25, 2018 — When half the players on the roster did not have much experience in the sport prior to joining the basketball co-curricular activity (CCA) in Junior College, standing a win away from the second round of the National A Division Basketball Championship would have already been a revelation to many.

Except that Catholic Junior College (CJC) knew from the onset that they could be more than just surprise packages.

CJC successfully attain their pre-season goal of reaching the second round of the nationals following a scrappy 53–45 victory over River Valley High School (RVHS) in their final preliminary round encounter.

Captain Luke Cheong (CJC #55) led the way with a game-high 12 points and canned a three-pointer with 16.3 seconds left in the third quarter to put his team up 44–28 as they headed into the final quarter with their biggest lead of the game.

With the knowledge that a win against RVHS would see them qualify for the second round, CJC were hungry to make the dream become reality.

“Knowing that we’ll achieve our primary goal of advancing to the second round with a win, it gave us greater motivation going into the game. We wanted to redeem ourselves as we did not make it last year,” shared Luke (CJC #55).

“We knew we had a good chance (of making the second round) but it didn’t come easy. We had to earn it,” he added.

When Keefe Tan (RVHS #4) — who scored a team-high nine points in the game — capped a 10–0 scoring run from RVHS to cut the deficit to 43–48 with 2:52 remaining in the game, CJC’s hopes of qualification were hanging by a thread with the momentum fully on the side of their opponents.

RVHS then failed to convert their opportunities on several possessions before Gordon Ngiam (CJC #23) and Luke (CJC #55) made back-to-back fast break lay-ups to end a six-minute scoring drought for CJC that gave their team much-needed breathing space in a frantic final few minutes.

After CJC secured progress into the second round for the first time since 2015, Luke (CJC #55) credited the strong support system for the success of his team.

“Many of our players did not have much experience playing basketball prior to Junior College. Our teachers helped organised friendlies, which allowed us to gain valuable experience, and coupled with the guidance of our coach, we managed to improve drastically,” he commented.

“The numerous matches we played in the NYSI (National Youth Sports Institute) tournament and many other friendlies helped us greatly in gaining confidence and improving our team chemistry,” the year-two student added.

“We know that it will be tougher with the stronger teams but we will play to our best as a team. Hopefully, we can defy all odds and make history for our school,” commented Luke (CJC #55).