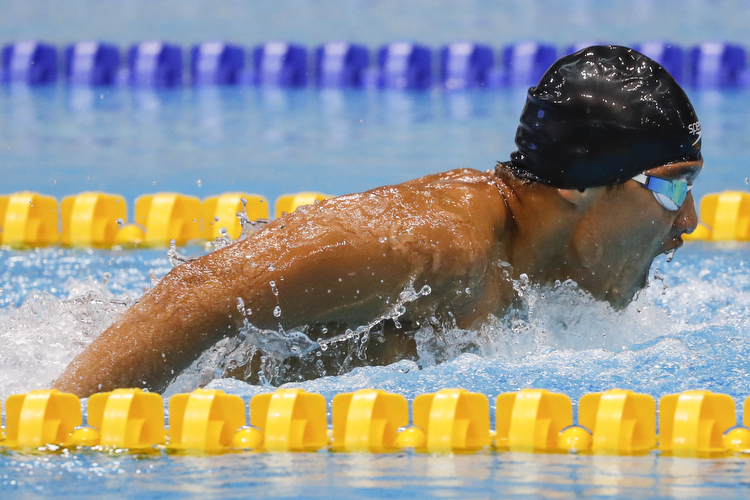 An impressive swim by Ephraim in the Boys’ 200m Butterfly C Division final saw him shave off almost two seconds from his personal best of 2:08.18 seconds to eventually clock a time of 2:06.32, en route to lowering the five-year-old record.

“I just followed my coach’s advice and gave everything that I had. I’m actually quite pleased with the timing, I worked hard for it,” Ephraim explained.

Earlier that day, teammate Mikkel Lee broke his second meet record in the Boys’ B Division 50m Backstroke with a time of 26.78s. He had erased the previous record in the preliminary heats with his 27.50s effort, but Mikkel stepped it up to the next level with a dominant swim in the finals.

Meanwhile, in the Girls’ B Division, Raffles Girls’ School’s (RGS) Sarah Yip claimed her second individual gold as she shattered the 2:24.33 meet record with her time of 2:21.04 – a remarkable three seconds lower.

Sarah shared the simple mindset behind her success: “I was planning to just try my best and see how it goes because if you try your best then that’s all that matters.”

The day concluded with the 200m Freestyle Relays, which saw the swimmers team up to bring glory to their schools.

In the Boys’ B Division, ACS(I)’s quartet of Mikkel, Thor Olafson, Ernest Ching, and Jonathan Tan were in dominant form, clocking in at 1:34.94. After a close contest for second place, Raffles Institution (RI) stole the Silver with a timing of 1:39.99, while rivals SSP finished in 1:40.36.

Mikkel shared on the team’s growth: “I think it was a good race for us overall, we all swam pretty close to our personal best and I think together we bonded as a team through this experience.”

Teammate Ernest added: “We’re still proud that we managed to win a gold medal for our school.”

In the Boys’ A Division of the same event, rivals ACS(I) and RI were neck-and-neck up to their second swimmers.

At the halfway mark, ACS(I) were a mere third of a second ahead of RI, touching the wall at 48.45 and 48.62 respectively. However, the former’s quartet of Ong Jung Yi, Ashley Wong, Kai Olafson, and Gabriel Foo would not be denied as they pulled ahead, stopping the clock at 1:36.22.

RI, despite having the fastest qualifying time, settled for second as they finished in 1:38.05. ACJC convincingly rounded out the top three with a time of 1:40.02.

When asked about how their swim went, ACS(I)’s Gabriel Foo expressed his delight with the win: “I felt like we did it perfectly, our goal was to get a victory and the first place for ACS.”

In the Girls’ B Division, RGS was dealt with an upset by eventual champions Methodist Girls’ School (MGS) and runners-up Singapore Sports School (SSP).

The RGS quartet had qualified for the finals with the fastest time but had to settle for third. In fact, they were out of medal contention for the first three legs, until anchor Sarah Yip, who recorded the fastest split time, helped her side make a comeback for the Bronze.

The MGS quartet, consisting of Grace Marie-Low, Chelsea Khoo, Natalie Ho and Gan Ching Wee, knew it was going to be a close race with their rivals RGS and were evidently glad to have clinched the Gold for their school in a time of 1:49.87.

“I think we are all definitely very delighted. We all put in our best effort and that contributed to our winning time,” said Ching Hwee.

Chelsea added, “We just knew we had to give our best in order to win. We encouraged and pushed one another.”

In the A Division category of the same event, RI’s quartet, consisting of Cherlyn Yeoh, Chua Wei Lin, Kathlyn Laiu and Elizabeth Lee, clocked a time of 1:48.41 to lower the six-year-old meet record of 1:49.24.

It was a feat made possible by the great trust they had in one another.

“We don’t train together so we don’t have the opportunity to practice relay changeovers, but we trust that all of us will execute it properly. The trust is always there,” said Elizabeth.

The girls could count on one another to for support too, even right before the race.

“Especially in the reporting room, where the atmosphere is very tense and serious, we will try to joke around and encourage one another so that we won’t be too stressed about the whole thing,” shared Cherlyn.

Runners-up ACS(I) finished more than four seconds behind with a time of 1:53.87, while Singapore Sports School (SSP) posted a time of 1:56.77 to come in third.

On the Boys’ side, ACS(I) bagged their fifth consecutive grand slam with a clean sweep of the Boys’ A, B and C Division titles.

ACS(I)’s own Mikkel Lee, who had helped reinforce their stranglehold on the title for the past four years, shared on the magnitude of five straight grand slams: “It means a lot, as we see how the sacrifices that we make individually and as a team bear fruit. This is something that cannot be done without the support from our parents, teachers, and friends.”