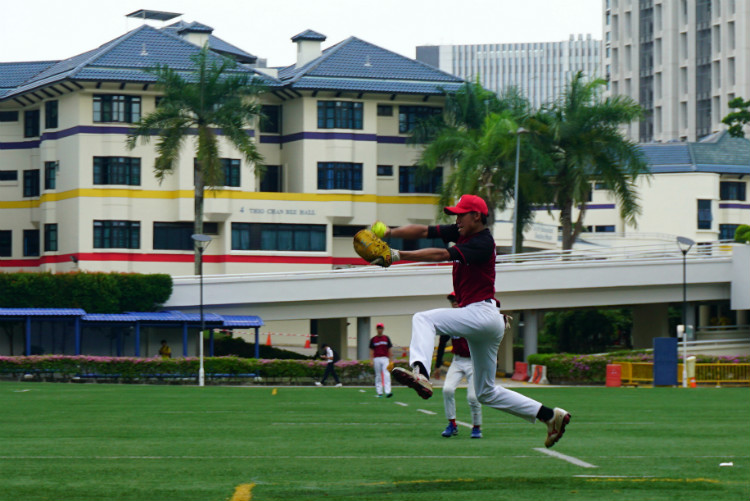 Their ace pitcher Aloysius Ong dominated the match with 11 strikeouts, allowing only six hits throughout the five-inning match. ACS(I) pitcher Calvin Chirnside also put up an equally tough fight with eight strikeouts under his belt.

“The runs at the start were really well-fought for, coming from Aloysius and Joshua. Later on, when we started hitting, I was honestly really happy as we got stronger in our mentality to hit and make plays,” said HCI’s captain Anthony (HCI #49).

The highly anticipated match of the two powerhouses started off with an unfortunate free walk to Silas (HCI #02) due to a hit by pitch. However, ACS(I) regained composure and ousted the next three batters with their impenetrable defense, leaving Silas stranded on third base. In the bottom of the first inning, pitcher Aloysius (HCI #08) stunned the crowd with three consecutive strikeouts, holding down the score at 0-0.

Hwa Chong’s Joshua (HCI #13) opened the second inning with a home run to the roof of the ACS(I) building. Both pitchers then proved themselves worthy with back-to-back strikeouts to end the inning.

The second run of HCI came in the third inning by Anthony (HCI #49) who made a safe bunt and scored due to an illegal pitch by Calvin (ACS(I) #06). The rest of the inning swiftly ended under the tight control of the fielders of both teams.

Once again, Aloysius (HCI #08) was unstoppable with a homer in the fourth inning, while Joshua (HCI #13) followed with a single to centre field. To his dismay, the subsequent batters were ousted by two strikeouts and a quick out at first base. On the other hand, ACS(I) began advancing onto bases as Gabriel (ACS(I) #13) was awarded a walk after hit by pitch and Tristan (ACS(I) #20) drew a base-on-balls. In response, HCI strengthened their defense and ended the inning with no runs scored.

In the last inning, there was a change in pitcher for ACS(I) from Calvin (ACS(I) #06) to Jeremy (ACS(I) #08) who was previously playing as a right outfielder. This switch accompanied by the building up of momentum by HCI led to five runs earned, specifically three hits by Silas (HCI #02), Aloysius (HCI #08) and Joshua (HCI #13).

As the top of the last inning was ended by accurate plays by ACS(I) defence, ACS(I) saw an opportunity to turn the tables. With relentless fighting spirit, Keith (ACS(I) #10) powerfully drove the pitch to left outfield contributing to ACS(I)’s first and only run of the match which was assisted by Zijia (ACS(I) #18) and Tan (ACS(I) #09).

“We adapted to the pitcher’s pitch a little too late which was why the hits came mostly in the last inning,” commented ACS(I) Vice-captain Calvin. Despite their efforts, HCI’s defense was too strong and the game ended with a score of 8-1.

Upon reflecting, ACS(I) Captain, Gabriel added: “Going into the game, we wanted to support each other on and off the field. I think we expected the game to be challenging, tight and our expectations were met.”

The HCI duo later attributed the win to the team’s mental preparedness and their knowledge of the type of pitches coming from ACS(I). They felt proud of their team that they were able to persevere through and stay grounded until the last out even when leading.

ACS(I) and HCI are both vying for the champion title and will continue to work hard and strive to improve in their upcoming matches. ACS(I) will be up against River Valley High School, while HCI will be playing against defending champions Raffles Institution on 18 April, Wednesday.

When asked about their opponents, HCI Vice-Captain Silas said: ‘We have a huge amount of respect for Raffles but this year, I believe my team really has the hunger and personnel to clinch the title.’