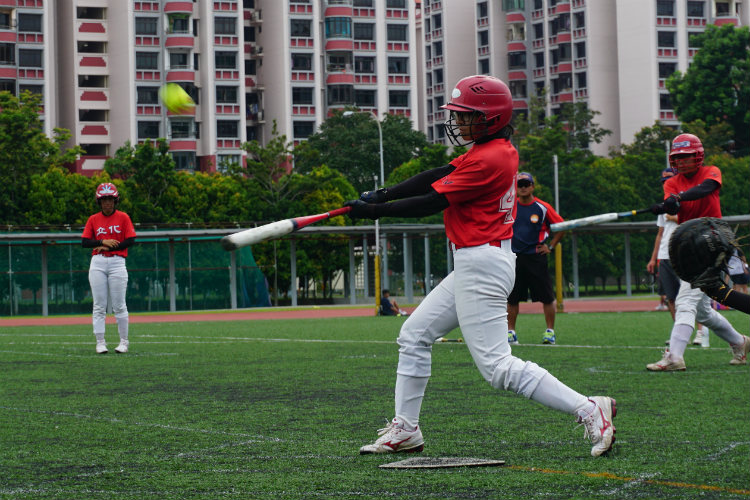 River Valley High School, Tuesday, April 10, 2018 — River Valley narrowly beat Dunman High School to record their first win of the season. While both teams showed strength in batting, their defence paled in comparison throughout the game.

The game started off with things looking bleak for Dunman High School. River Valley started off strong during their first at bat, with Charmaine (RVHS #99) and Yong Sing (RVHS #47) scoring two home runs. In addition, continuous mistakes made by Dunman High School’s fielders allowed River Valley to chalk up a total of six runs during the first inning.

Despite the poor start, Dunman High School came back to surprise themselves with their equally commendable batting performance.

Shae Linn (DHS #11), Nicole (DHS #23) and Grace (DHS #55) made solid hits to outfield while Xinyi (DHS #20), the last batter in Dunman’s line-up scored a home run with her hit past centre field. River Valley did not fare much better in their defence, which resulted in Dunman taking the lead, 7-6.

Both teams’ defence remained unstable throughout the next two innings. Therefore, while each team gave away many runs, they were able to earn them back.

With both teams’ performance mirroring one another, the scoreline remained neck and neck.

After the third inning, River Valley had taken a slight lead over Dunman High School, 16-14. With one more inning left in the game, Dunman High became even more determined to take the win. They played their best defensive inning in the entire game, getting three clean outs with no runs scored by River Valley.

They were well on their way to tie up the score, with only one down and two runners on base, when a misstep by Shae Linn (DHS #11) caused her to land in an unfavourable hot box situation and was tagged out. With two down, the last infield fly caught by River Valley’s shortstop Charmaine (RVHS #99) sealed River Valley’s victory.

“I didn’t think we will have such a close fight with them, because RV was one of the seeded teams last year, so we just wanted to play our best,” said Dunman High’s captain Laurelle (DHS #12).

Despite being comforted by the fact that they were on par with River Valley, Dunman High’s vice-captain Shae Linn (DHS #11) felt they could have been better.

“I think we made a lot of funny errors (during fielding) because we never communicate and all,” said Shae Linn.

“Sometimes they don’t know where to play when they get the ball,” added Nicole (DHS #23).

River Valley’s vice-captain Celina (RVHS #07) felt that “(the game) could have been better. It wasn’t our best performance and we will come back stronger in the next game”.