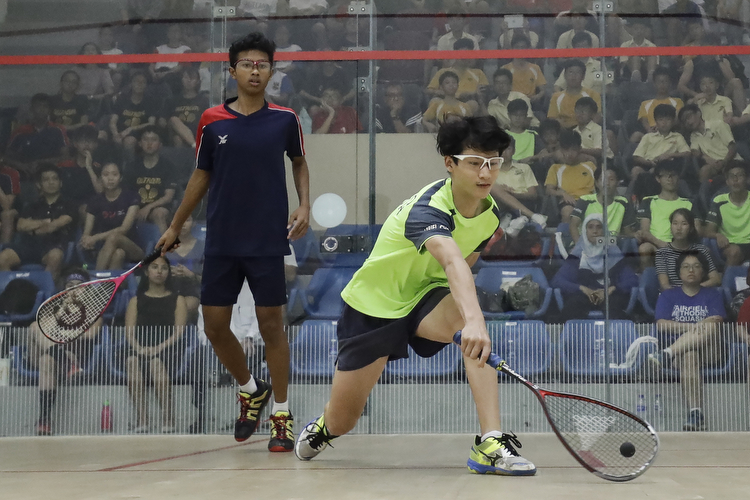 Kallang Squash Centre, Wednesday, April 11, 2018 — The player line-up was in Outram Secondary’s favour, with their stronger players facing Fairfield Methodist School’s lower-ranked players, setting up the scene for a hopeful final. Being the underdogs that beat powerhouses Raffles Institution in the semi-final, there was a good fighting chance for them to win this year’s National B Division Squash Championship.

However, Fairfield thwarted their plans, forcing Outram to settle for the silver with a 0–5 loss.

“We weren’t in the best condition today, but all of us tried our best,” said Outram’s captain Ho Yao Hui.

First in the court were Outram’s Lai Ka Chun and Fairfield’s Jerome Aw, both left-handed players.

Jerome took the first point of the final with a shot that landed in the nick of the backcourt, preventing Ka Chun’s return. With better control of the ball and good choices of shots, Jerome started leading in the points, making his opponent move all over the court in defense.

Jerome made the first game 9–4 in his favour with a strategic choice of a boast. He repeated his strategy, and wrapped up the first game with a drop-shot to take down Outram’s third-seeded Ka Chun 11–4.

Jerome won the second game 11–2, with powerful cross-court drives and precise shots. Ka Chun’s confidence was lowered and the third game saw him fail to clear the path for Jerome early in the game, causing a stroke to be given to his Fairfield opponent.

In a last bid to take the match into a fourth game, Ka Chun maintained at least three match balls, but Jerome ended his match 11–6 with a powerful drive.

Outram’s top seed Mohammed Ridhwan was up next against Gabriel Chow of Fairfield. A crucial match for Outram, Ridhwan sought to even out the current 1–0 score to increase their title chances.

However, their first game started out with Gabriel stunning Ridhwan by playing to his own strengths, making powerful cross-court drives to the left with Ridhwan unable to return them for two consecutive points. Gabriel went on to take five consecutive points, until Ridhwan figured out how to take more control of the game.

Ridhwan started to get used to the pace, and attacked by making trickle boasts, but Gabriel managed an 11–6 win. Ridhwan made a comeback, taking the second game 11–5. Gabriel made mistakes at the tin and a trickle boast attack failed. Ridhwan also saved a tight shot at the front right corner and returned the ball near to his body, but since Gabriel was far away from the ball, no stroke was awarded to his dismay.

After gaining advice and taking time to refocus his thoughts, Gabriel returned to the third game with more powerful shots, scoring seven consecutive points. With strong and precise cross-court drives to the back corner, he took a 10–2 lead.

However Ridhwan did not give up and scored four consecutive points, before conceding the game to Gabriel 6–11. Gabriel led his team to a 2–0 lead by taking the fourth game 11–5, to cheers from Fairfield’s supporters. All they needed now was for Lee Waye to win the next match before they would be crowned champions.

For Outram, they can hold their head up high after a stellar performance this year. Fairfield’s captain Kevin Kee commented that his team were surprised by Outram’s performance in the semi-final.

“They were underdogs yet won Raffles in the semi-final,” he said. “It was quite close. They improved a lot.”