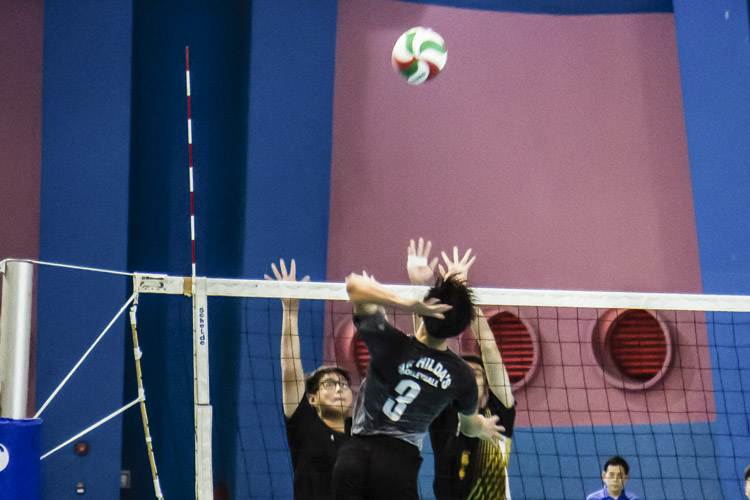 Volleyball powerhouse St. Hilda’s Secondary to extended their dominance on the courts with a convincing win over Catholic High in a repeat of the B Division final in 2015.

“We did well in our fighting spirit today. Whenever we won points, our morale would get boosted and we would play better. We played well as a team today,” said St. Hilda’s Captain Lester Chua (#7).

From the first blow of the whistle, SHS was off to a great start when Chen Jian Xin (#3) fired from high above, claiming the lead.

Armed with players who had incredible vertical leaps, SHS easily led their rivals on a five-to-nil run with just point-blank spikes before a timeout was called from Catholic High.

Though the boys in black had the height advantage and often doubled team to block their opponent’s spikes, SHS still managed to obtain points whenever the spike would hit their rivals’ hands and be rebounded down onto Catholic High’s court instead of back to the attacker.

It was a sight to behold as the libero from both teams displayed high-calibre dives and saves from unimaginable distances.

Warming up, St. Hilda went on to deliver lightning-quick spikes that put them on the score sheet with every attempt. Meanwhil, Catholic High tried to regroup and face their opponent’s superior offence, even going as far as putting three players behind the net to defend.

The hope that Catholic High held on to was beginning to fade. With every successful kill that SHS made, it was like a hard punch to their opponent’s morale.

St Hilda’s eventually captured the first set 25-15, with the final point coming through a service ace from Jaron Lee (SHS #4).

As SHS carried on their point streak in the second set, Catholic High began to fumble and missed opportunities to rebound. Every shot was unexpected and they had little to no time to react when the boys in grey reached in for the kill.

But SHS knew that it was all-or-nothing as they had to make sure they win another set to make their efforts worth it.

When asked about their mindset after the first set, St. Hilda’s Chen Jian Xin (#3) commented: “We told ourselves to be on guard and not to be slack, if not we would become careless and make unnecessary mistakes.”

With that mindset at the back of their heads, SHS definitely kept to their promise as they fired up and pushed to widen the gap.

Given their ability to leap to amazing heights above the net, the Hildans were not going home without proving their superiority. They further bombarded the boys in black with easy kills.

This left Catholic High no choice but to call for their second timeout to break St. Hilda’s rhythm. However, with the red-hot St. Hilda’s still going strong on them, Catholic High succumbed to their opponent’s push and fake shots.

As the Hildans overcame their adversaries with a final spike to the left flank, they eventually won the second set 25-13 and finished as national champions at 2-0.