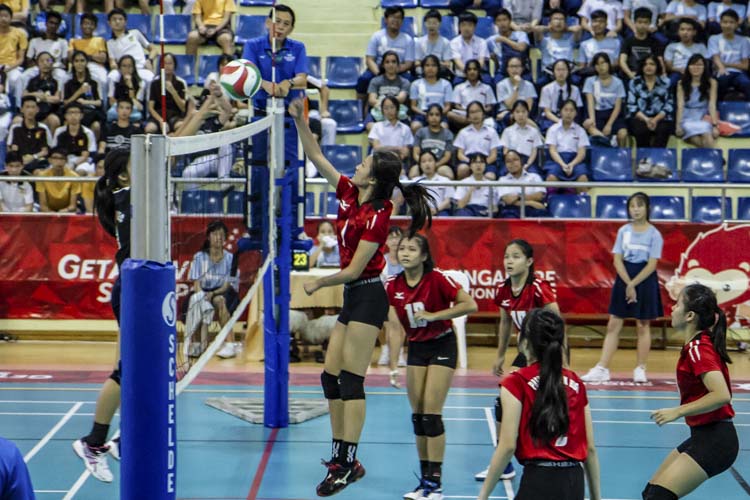 “We did well today. We definitely had more resilience and endurance in this game compared to the previous,” said Presbyterian’s Ng Kai Lin (#4).

Dunman finished fourth while Presbyterian was second in the Nationals last year.

Presbyterian High, clearly hungry for the championship title, got their footwork set up early. They split up well to cover ground and finished their attacks through Ng Kai Lin (PHS #4) and Adeline Sim (PHS #12) who got the job done swiftly.

Dunman, on the other hand, switched to using dinks to overcome the lanky defence displayed from Presbyterian when their spikes were not going through.

After a service ace from Ng Kai Lin (PHS #4) went through, Dunman called for a timeout to regroup the girls in black.

It was point-after-point after that, however, as Presbyterian High carried on their assault against Dunman. The Presbyterians definitely did not give any chances as they were sure to spike down their opponents at every given opportunity in order to put more points on the board.

Dunman resorted to staying near to cover each other while Presbyterian High spread out to predict their rivals’ next move, resulting in a long rally of spikes and digs. Eventually, the score went to Dunman as the girls in red failed to predict the correct angle and instead shot the ball into the net.

It was not enough to set Presbyterian back as they followed up with a base-line spike to claim the first set at 25-17.

But Presbyterian High was starting to fumble. It wasn’t long before they started to miss chances to convert by firing high. Then, it was time for Dunman to shine. They calmly proceeded with their set play, waiting to strike whenever Presbyterian made a mistake, in hopes of mounting a comeback.

While Presbyterian worked on their defence behind the net and offence around the flank side, they slowly bridged the gap with their 5-1 set play.

With both teams being active on their own end of the court, each displayed great athleticism to prove themselves worthy of the title. It became a game of whoever was better at spiking would win the kill point, hyping the crowd further as the score difference never went past two points.

In the final moments, Presbyterian fired a successful hard spike followed by loud cheers from the audience but Dunman was quick to reply immediately.

Both teams were at their peak performance, with each giving the best that they have trained hard for. When one team scored, the other was sure to tie it in the next possession, resulting in a deuce of five points since the 23-point mark.

Eventually, Presbyterian High’s dream of becoming National Champions came true when their spike went across and a nervy Dunman could not rally the ball back after three attempts, resulting in the Presbyterians sealing the second set 29-27 and clinching the National Champion title at 2-0.

Presbyterian’s victory meant that it was their first gold since 2012 and they have improved from being first runner-up last year to champions this year.

Presbyterian’s Adeline Sim (#12) commented: “We were just a few points away from being national champions, so it was just all out in our minds. We were shouting our hearts out when we finally won our first gold medal in a few years. We broke history today.”

When asked about a message for the team, Ng Kai Lin (PHS #4) said: “You all did great and today is a memorable day.”

“I will never forget what the team has left behind. The hardship that we have gone through and endured together every single training has paid off today,” added Adeline.

Dunman’s Captain Tan Mei En (#7) said: “Our team spirit was good today. We did well even though we lagged behind. We still cheered on and didn’t give up. We were cautious in the second set as we knew they we had yet to win.”

“You all are very good teammates, I won’t want to lose you all,” added Mei En.