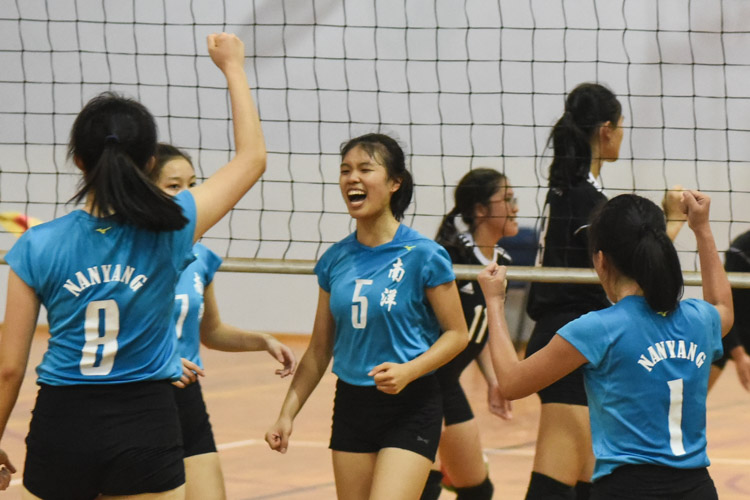 “We fought really hard today. Even though the season didn’t end as what we have expected, we didn’t give up today. We still fought hard,” Nanyang’s Tan Si Xuan (#7) said.

Nanyang’s captain, Megan Seah (NYGH #8) also added: “We can definitely improve on our spirit. We should also be braver whenever we are lagging behind and not give up so easily. All the best to this year’s C Division Girls and next year’s B Divison.”

From the start, it was clear that Nanyang Girls’ had the upper hand, especially through their captain, Megan Seah (#8) who cleared hard spikes easily with her height advantage. She also proved to be a tall obstacle for her opponents as she was at the front line.

Cedar, however, continued their mistake from the previous game – which was failing to decide who will receive the ball. They were seen several times waiting for one of their players to hit back but to no avail.

Coupled with an offensive spark of Tan Si Xuan (NYGH #7), Nanyang wasted no time in pulling away with the lead.

The reason why Nanyang was able to score so many points was because they were always ready to strike in their formation at the front line while Cedar just took whatever that came at them without planning ahead.

However, the tide turned when Nanyang became nervous and started to fumble. Shots that fired high were aplenty and even their defence started to lag behind, giving Cedar the chance to come back.

It was as though Cedar finally showed their potential when they reclaimed the lost points through a nervy Nanyang defence.

Refusing to go down without a fight, Nanyang regained their composure and regrouped their set play to exchange rebounds for points, ending the first set with 25-18.

With Cedar settling into the game, their morale improved with every successful kill in the next set. They were constantly pressuring their opponents greatly with their teamwork and showed no signs of backing down.

Nanyang’s call for a timeout proved to be a turning point as it managed to disrupt Cedar’s rhythm.

But a strong-willed Cedar wasn’t ready to throw in the towel as they continued their quest to maintain a strong defence behind the net, bridging the deficit.

However, with due teamwork and perseverance from Nanyang, they eventually inched past Cedar for their second win set at 25-20. In the end, Nanyang finished in third place while Cedar finished fourth.

Cedar’s captain Zoey Lum (#7) said: “It wasn’t our best today. We definitely could have done better in the middle of the game and I believe that my juniors will do a better job next year.”

“In the second set, we all had the adrenaline rush and it was hard to contain that excitement on the court. The thing that my team did the best today was catching up the score,” she added.