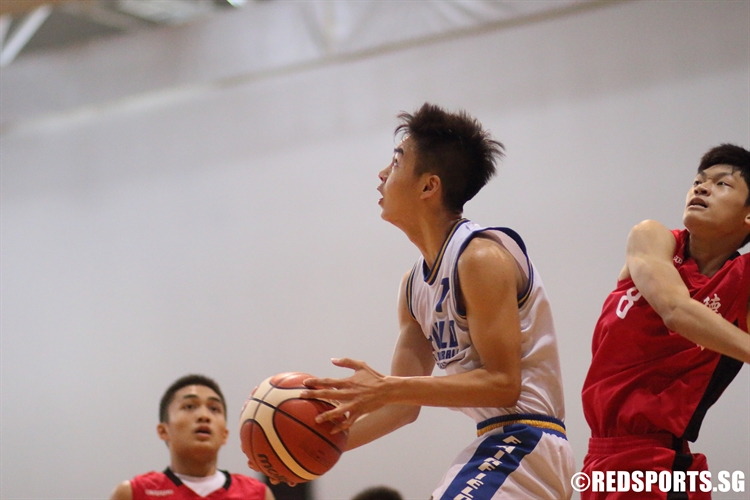 OCBC Arena, Monday, April 2, 2018 — Fairfield Methodist School (FMS) stayed in contention for a spot in the national semi-finals after ending Dunman Secondary’s (DMN) unbeaten start to the season with a 58-41 victory in the second round of the National B Division Basketball Championship.

There are no longer any schools with a perfect record in the nation after Dunman and Anglo-Chinese School (Barker Rd) saw their season-high 13-game win streak busted on the same day. The latter had suffered a heart-breaking three-point defeat in the hands of Christ Church Secondary.

The backcourt one-two punch of Chiam Ming Yao (FMS #1) and Russell Lim (FMS #12) proved too much to handle for Dunman, as the duo scored 18 and 13 points respectively for the South Zone runners-up. Guo Zhi Wei (DMN #6) bagged 14 points despite the loss.

This victory could potentially be a season-changer for Fairfield, as a Dunman triumph would have seen the East Zone champions qualify for the semi-finals together with Presbyterian High School.

Fairfield jumped out to an 8-2 start courtesy of two buckets each from Russell (FMS #12) and Ming Yao (FMS #1).

Chua Jia Ming (DMN #7) tied the game at 8-8 with 3:21 left in the opening quarter via a bank shot in the paint, but Fairfield closed the quarter on a 7-2 run to take five-point cushion into the second quarter.

Jeremy Graves (FMS #33) assisted Ming Yao (FMS #1) for a lay-up on the break with 2:33 remaining in the second quarter to put Fairfield up 23-12, their largest lead of the opening half.

Fairfield dominated their opponents 21-9 in the third period and built a 22-point lead, their biggest of the game, when Carl Belanger (FMS #22) scored with 1:14 remaining in the third quarter.

Despite a promising last quarter from Dunman, a comeback never materialised and Fairfield comfortably saw out the game for a 17-point win at the final buzzer.

This win meant that Fairfield’s destiny is in their own hands ahead of their final second round fixture.

For Dunman — which had won each of its first four national championship games by single digits and never by more than seven points — it was back to the drawing board after tasting defeat for the first time this year.

The final round of fixtures in the second round group — which will see Dunman face Presbyterian High and Fairfield take on Bukit Panjang Government High School — should prove to be an intriguing one with all four schools still in contention of making the top four.

Fairfield will appear in the national semi-finals for the first time since 2015 if they defeat Bukit Panjang, regardless of the result between Dunman and Presbyterian High.

Bukit Panjang will make the top four if they can get a 10-point victory over Fairfield, coupled with a Presbyterian High victory against Dunman.

Both matches will tip-off at 11.30am on April 4 at the OCBC Arena in what promises to be a grandstand finish to the second round.