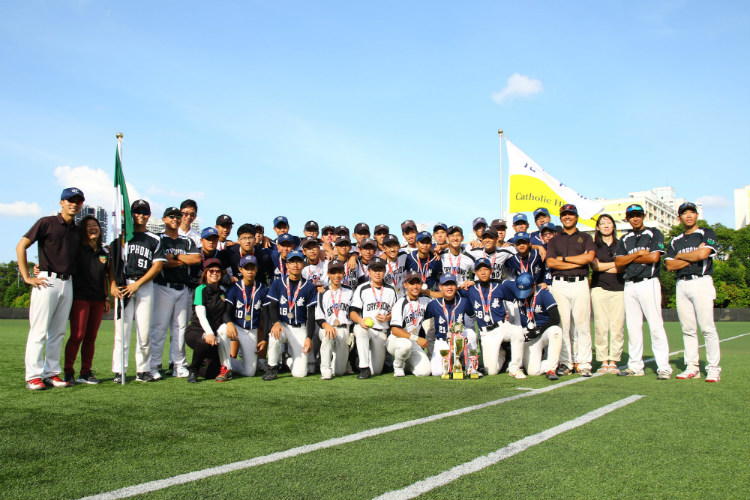 Raffles Institution was emotional after their victory. Audric Chia (RI #3) said that his teammates “really wanted this win”.

“We were like self-training and all, even during the holidays. We were really working hard,” said Audric.

It was also the best farewell the team could give to Yuji Higashitani (RI #22), who was leaving the team after this season.

For Catholic High School, on the other hand, they were under the added pressure of being defending champions.

“We were aiming to be in the finals, to get the 4th overall championship in our whole softball career at Catholic High. We were just aiming to finish our season well,” said Catholic High School’s captain Stancey Choo (CHS #21).

Both teams entered the game feeling nervous. The teams had yet to meet each other during the National Games but had scouted one another during other softball carnivals. With a very tense atmosphere, the game commenced with Catholic High attacking first.

Low Zu Ray (CHS #05) started off Catholic High’s first at bat with a nice hit to centre field which earned him two bases. Unfortunately, he was unable to score owing to RI’s shortstop Max Koh’s (RI #11) smart play that got him out at home. On the other hand, Shane Lee (CHS #56) managed to bring a run in for his team after a slip up on the part of RI pitcher Mathew Tan (RI #90).

The score remained at status quo in the second inning with both teams being unable to score.

In the third inning, a strong series of attacks by both Catholic High and Raffles Institution allowed both teams to gain ground.

Joshua Lim (CHS #11) almost scored a home run with his long drive to right field. He, alongside Aaron Toh (CHS #77), ultimately managed to come home after being advanced by consecutive hits made by their teammates. But tight fielding by RI’s infielders helped prevent any more runs from coming in.

Raffles Institution similarly had a strong at bat, with most of their players making hits. Most notably, Alexander Ang’s (RI #77) solid hit in between the centre and right outfielders brought Yuji Higashitani (RI #22) and Daryl Teoh (RI #42) home. RI’s coach, Farhan Harahap, particularly commended Alexander for his performance in the game.

“He hasn’t been hitting this entire season but today he made two hits that I think brought in a total of three runs,” said Coach Farhan.

“I think for today he was the one that stood out for me.”

Alexander Ang (RI #77) was subsequently brought home by John Wong’s (RI #27) hit past 2nd base. John Wong’s (RI #27) was also advanced home when Zheng Shiying (RI #7) made a hit to outfield. The inning concluded with the score at 6 – 3, with Raffles Institution still in the lead.

The fourth inning saw Catholic High earnestly trying to tighten the scoreline. Low Zu Ray (CHS #05) got himself on 1st base with a hit to right field. Upon seeing that the next batter, Shane Lee (CHS #56) made a hard hit over Raffles’ 3rd baseman, he made an ambitious run for third base. He was ultimately successful but injured himself in the process. Thankfully, his efforts paid off as Benjamin Bay (CHS #49), whom he was subbed out for, managed to make it home owing to a missed tag by Raffles’ catcher.

Catholic High managed to successfully prevent Raffles from increasing their lead during the bottom of the fourth inning, leaving the score line at 6-4. However, their batting did not pull through in the fifth inning, allowing Raffles to take the ultimate victory 6-4.

Catholic High was teary-eyed after the match. “For me, I’m glad that everybody played their best, and their best was enough,” said vice-captain Joshua Lim (CHS #11).

Team captain Stancey Choo (#21) was also very grateful to his team, saying: “The moment I enjoyed the most was seeing how the team was bonded together when we were trailing behind.”

“It just makes me happy seeing how my team was behind my back.”