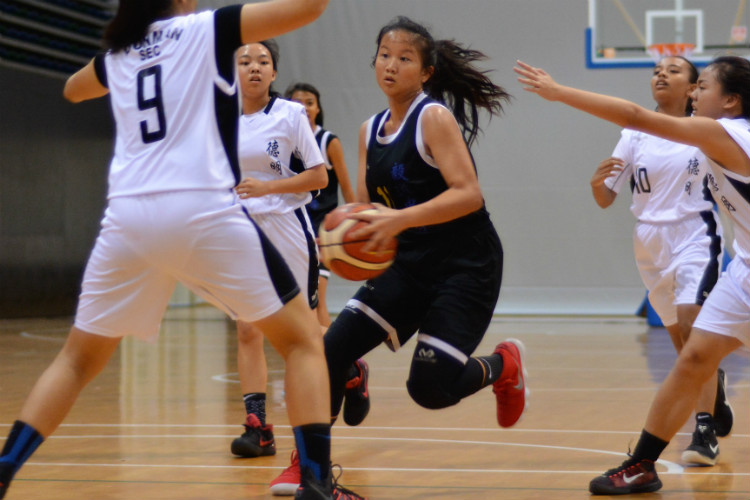 OCBC Arena, Friday, March 23, 2018 — Yishun Town Secondary (YTS) finished with a 3–0 record in the preliminary round of the National B Division Girls’ Basketball Championship and secured a second round berth after overcoming Dunman Secondary (DSS) with a 41–28 victory.

Xie Muqi (YTS #11) led the way in the scoring column for Yishun Town with a team-high 11 points in the victory.

Haseenah Ariffin (DSS #15) put up a valiant performance for Dunman with a game-high 14 points, who are now eliminated after falling to a 1–2 win-loss record.

Both sides displayed impressive ball movement on offense to create open shots in what was a tightly contested first quarter. However, Dunman’s defense struggled to contain Yishun Town’s offense on the boards, giving up several offensive boards that resulted in second-chance points for the Yishun Town offense.

Xie Muqi (YTS #11) also provided a spark for the Yishun Town offense in the first quarter, where she dropped 7 of her team-high 11 points in the period to help Yishun Town grab a 14–8 lead at the end of the first period.

Dunman struck back in the second quarter with a quick 6–0 run to tie the game up at 14 apiece after Nur Qistina (DSS #14) drove through the defense for a lay-up.

After Nur Afiyah (YTS #5) converted one of two free-throws to give Yishun town a 15–14 lead with 7:03 remaining in the period, both sides went cold on offense as they went scoreless over the next 3 minutes and 20 seconds.

Nur Afifah (YTS #8) ended the scoring drought after making a free-throw to make it a 16–14 ball game with 3:43 left and Yishun Town would proceed to pull away for a four-point cushion with a 20–16 scoreline at half-time.

Yishun Town would dominate the third quarter on both ends of the floor to outscore Dunman 15–4, where they unleashed a swarming full-court press forced Dunman into forced shots and turnovers for easy fast-break points.

Despite being down 20–35 heading into the final quarter, Dunman responded with grit on the defensive end as they challenged every shot the Yishun Town offense took and limited Yishun Town to only 6 points in the final period.

However, turnovers continued to plague Dunman, costing them offensive possessions and scoring opportunities that they needed for a shot at a final quarter push. As a result, it was Yishun Town that emerged as victors with a 41–28 scoreline at the final buzzer.