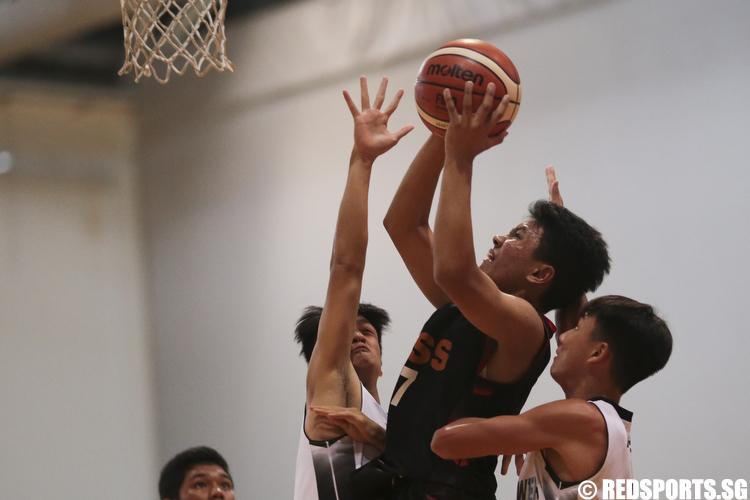 OCBC Arena, Thursday, March 22, 2018 — A clutch under-basket shot in the last few seconds from Unity Secondary (USS) secured the closely contested match against Mayflower Secondary (MSS) in round one of the National B Division Basketball Championship.

As soon as the ball was tipped, it was clear that Unity was adopting a full court press and wanted to put heavy pressure on their opponents early in the game.

Hustling was chicken’s feet for Unity but they failed to convert time and again due to their nerves. Even with a clear shot in sight, the boys in black were unable to convert them into points.

Mayflower, on the other hand, remained composed and shot whenever possible, ending the first quarter with a lead at 13-5.

Calling for a timeout to disrupt Mayflower’s rhythm proved to be unsuccessful as the boys in white continued pressuring their opponents with steals and fast breaks.

Unity, however, changed their game-plan and increased their pace to challenge their rivals’ stamina to slowly reduce the deficit. It was not long before Mayflower struck back with their own set of tricks to tie the game. Yet, Mayflower fought for every loose ball and managed to stay ahead 23-20 at halftime.

Unity continued to use a full-court press in the second half and was able to obtain additional possessions, drawing fouls in the process under the basket.

Offensive fouls and missed free throws were aplenty for both teams as the score remained stagnant.

Unity was only down three at 34-37 after three quarters played.

Finally heating up, Unity cooperated well under the basket and never gave up the chance to go up strong whenever possible.

Both teams upped the intensity in the final few minutes but were guilty of countless turnovers. It was closely contested down to the wire with both teams using fast break opportunities to add another few points to the scoreline.

Eventually, as both teams hustled hard under the basket, Nicholas Peh (USS #7) sealed the game at 48-46 with a clutch shot to hand Unity a hard-fought victory.

Unity’s Captain, Ryan Hoa (#2) said, “My team didn’t do very well today because our defence slacked off. In the second to third quarter, we gave our all for a comeback but were nervous. In the fourth quarter, we managed to make a comeback and maintain our score.”

“We can definitely improve our strength and defence to be much stronger in the game,” Ryan added.

“Our defence was good today. Despite them (Unity) being the West Zone Champions, we still put up a good fight. Our passing and shot selection, however, can be improved. Coming down the stretch, we did passes that were too soft and our shot selection was not the best,” commented Mayflower’s Azel Tsai (#11).