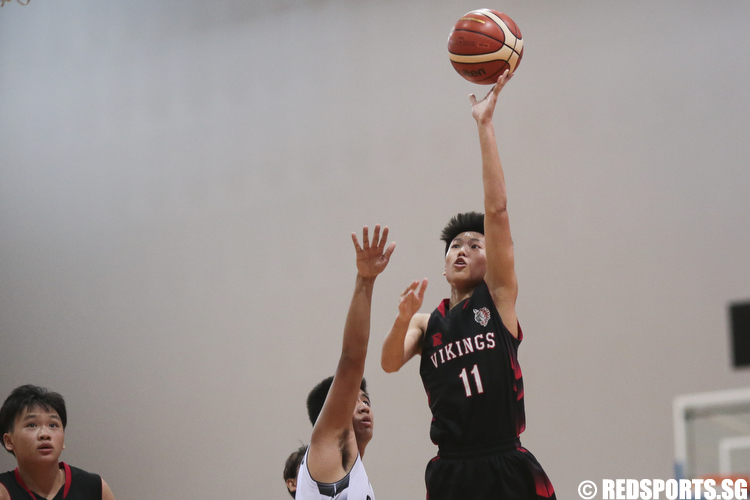 OCBC Arena, Thursday, March 22, 2018 — Consistent sharp shooting from North Vista (NV) Secondary overpowered the impressive ball movement of Ngee Ann Secondary (NAS) for a 69-51 in the preliminary round of the National B Division Basketball Championship.

Soon after tip-off, North Vista grabbed a quick lead through a jumper but Ngee Ann followed up with their own jumper to tie the game.

Pushing the pace with their superior athleticism, the Vikings were able to cut into their opponents’ defence while drawing fouls in the process.

As Ngee Ann capitalised on fast breaks and dishing out to open shooter at the last moment, they were able to confuse their opponents and this led to open treys beyond the arc.

Ngee Ann, though unable to match up well in one-on-one situations, showed impressive ball movement when collapsing as a unit under the basket. They were able to move the ball around their opponents with minimal effort to convert their shots.

Plagued by foul trouble, North Vista relied heavily on their threes and drive-ins to pull away with the lead, ending the first quarter with a 25-19 advantage.

Sim Yi (NV #5), Justen Chiam (NV #11) and Reuben David (NV #30) were not going down without a fight as the trio advanced with triple threats and shot from three-point territory to widen the margin whenever possible.

Led by Adam Tan (NAS #1), Ngee Ann was able to fight back through interceptions that led to fast breaks, forcing North Vista out of their comfort zone.

Coming into the second half, it was as though lethargy kicked in as Ngee Ann’s lack-lustre defence gave their opponents ample chances to cut into the paint.

Seeing this as an opportunity to capitalise on, North Vista wasted no chances in drawing fouls on lay-up attempts. From there, the Vikings pulled away as they converted all their shots while Ngee Ann could only watch as their hard work in the first half withered away.

However, the boys in white never faltered. They carried on playing to the best of their ability and their grit pushed them through the last few moments of the game.

Eventually, North Vista’s second-half dominance took down Ngee Ann and secured a 69-51 victory for the Vikings.

Chan Qi Feng (#3) from North Vista said, “We did well on defence today. However, there were times when we gave them a lot of chances for offensive rebounds.”

“We can definitely improve on our offence and box-outs for the next few games. Let’s work hard together guys,” teammate Dillon Ong (#9) added.

With this win, North Vista now hold a 2–-0 win-loss record in the nationals and will play Fairfield Methodist next. Ngee Ann drops to a 0–-2 win-loss record.