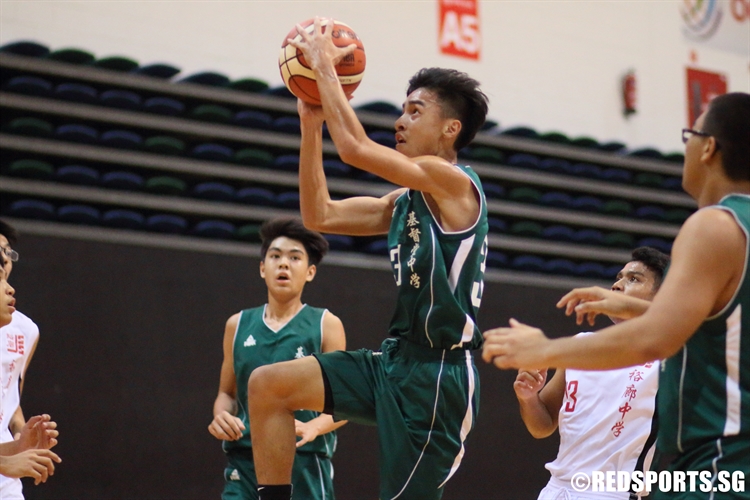 Pan Ming Hui (CHR #34) soars past the defense on a fast-break lay-up. He bagged 25 points in the victory. (Photo 1 © Chan Hua Zheng/Red Sports)

OCBC Arena, Tuesday, March 20, 2018 — Many would believe that finishing fourth in the National B Division Basketball Championship last year would have satisfied Christ Church Secondary (CHR), after all, they were never known for reaching the latter stages of the national championship on a regular basis.

Christ Church, though, have set their sights on a bigger goal for 2018.

“We aim to reach the national final this year,” Pan Ming Hui (CHR #34) said firmly after the game.

Ming Hui (CHR #34) scored 25 points to power Christ Church to a 60–44 victory over the West Zone runners-up Jurong Secondary (JSS) in their opening match of the tournament.

The swingman was the standout in a team that is known for its size and athleticism across its roster. His trademark drives to the basket are almost always unstoppable even when opponents see it coming.

The rebounding prowess of the Christ Church bigs limited Jurong to one shot on most possessions, and their quick outlet passes allowed their wings to go coast to coast for easy lay-ups at the other end. That was the story of the opening quarter, as Ming Hui (CHR #34) scored 10 points to help his team build a 16–12 lead.

Guard Kunlin (Jurong #7) and big man Duncan (Jurong #21) accounted for most of Jurong’s good offensive work early in the game and Jurong were very much in with a chance for most parts of the first three quarters.

Christ Church held a 29–20 and 39–28 lead respectively after the 2nd and 3rd quarters, with a comeback from Jurong still very much a possibility at that point.

Jurong’s bid for a revival in the final quarter was marred by missed opportunities as much as it was down to the good game management from Christ Church.

“We were anxious and didn’t dare to attack. When we had the chance to push the ball, we slowed down. We were just not hungry enough today,” commented Kunlin (Jurong #7), who bagged 13 points in the contest.

Christ Church briefly lost their double-digit cushion early in the final quarter but pulled away in the latter stages for a 16-point victory to get their national campaign off to a winning start.

For Jurong, it was back to the drawing board with a game against Guangyang Secondary coming up next.

“We need to cut out our sloppiness, play with more aggression and have a proper mindset. Most importantly, we want to proceed to the second round,” said Kunlin (Jurong #7).

Beating Jurong was simply a small step for Christ Church in their pursuit of glory, but they acknowledged that they have work to do ahead of their game against the East Zone Champions Dunman Secondary.

“We did not execute well both defensively and offensively. We have to improve,” added Ming Hui (CHR #34).

Some tweaks along the way might be essential for Christ Church to better their result from last year, but one thing is certain — Ming Hui (#34) has a big part to play if Christ Church are to earn an appearance in the national final.