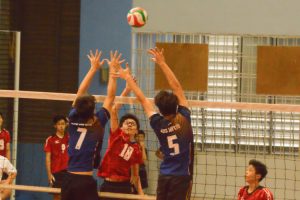 Both teams were off to a good start. AMK and PHS took turns to score but it was AMK who came out on top with quick reflexes. But Presbyterian was clearly hungry for a win with Yeo Jin An (PHS #16) spiking down repeatedly for kills.

However, it was quickly tied by AMK’s swift thinking who forced two tall defenders behind the net.

Though AMK had the height advantage, they let chances slip as they fumbled with every high ball thrown to them. But Bing Xuan (AMK #5) and Tristan Ho (AMK #7) were not going to let it go as they went for repeated kills with dinks and spikes to pull away with the lead.

Thanks to their speedy reactions, Presbyterian was able to respond to AMK’s serves and drive the ball far from their rivals to claim points.

AMK then went for a forced timeout to replan their strategy in order to overcome their upcoming setback. Ang Mo Kio stormed on to continue scoring increasing the point gap.

Knowing the next set was one that had to be taken, PHS heated up and begun concentrating on their offence near the net. This gave them many jousts in their favour.

However, defensive spark Lew Yan Ming (AMK #1) was a big threat to Presbyterian as his height coupled with sneaky tricks helped to obtain numerous kills, forcing his opponents’ composure to falter.

It was not long before Ang Mo Kio showed their prowess and drove down their rivals using hard spikes off PHS’ mistakes to the far end of the court.

Moreover, with Presbyterian’s services found wanting, they gave away precious points to their opponents, who further capitalised with far end spikes to finish off their rivals in the second set with a score of 25-12.

Ang Mo Kio’s Captain said, “We covered a lot of balls and space. My team helped to support a lot today. Our service still had a lot of errors and we can improve on our blocking.”