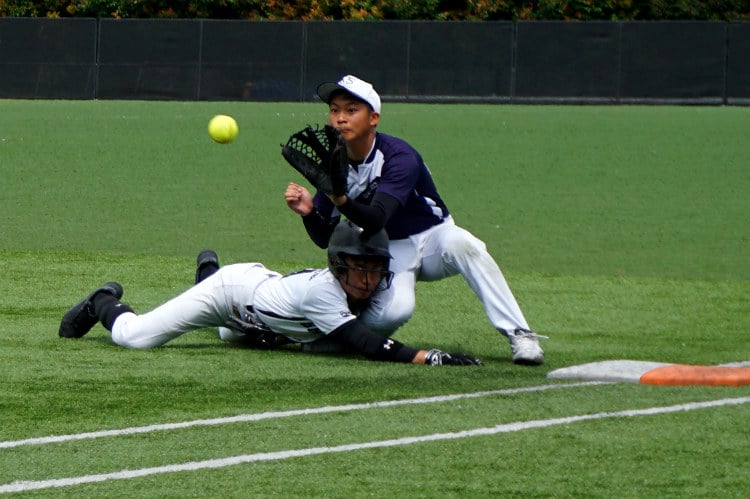 J Lim (ACSI #22) straddles the base and catches the ball from the catcher, while Max (RI #11) dives back to first base. (Photo 1 © REDintern Pang Chin Yee)

Raffles Institution, Tuesday, February 27, 2018 — In a game between two rather evenly matched teams, Raffles Institution’s (RI) stronger defensive performance made the difference, eventually helping them secure a spot in the semi-finals after their 8-5 victory against Anglo-Chinese School (Independent) (ACS) in the National B Division Softball Championship.

Both RI and ACS came into the game expecting to fight hard for the win.

“We are quite familiar with the ACS players. We did have friendlies with them before the season. We saw that they have a lot of potential and they train equally hard. So our expectations were to give our all during the game,” said RI’s captain Daryl (RI #42).

In the first inning, RI managed to gain a 4-1 lead over ACS. ACS did a fair job in attacking, with most of their batters managing to make contact with the ball to advance their teammates. J Leong’s (ACS #15) hit to second base allowed Harrizon (ACS #25) to score ACS’s first run.

Yet, RI fielders did a good job of keeping the scoreline tight. RI’s catcher Audric’s (RI #03) quick recovery after missing the third strike and centre fielder Daryl’s (RI #42) quick throw home after fielding a ball at outfield prevented ACS from scoring any more runs in the first inning.

On the contrary, ACS’s defence got off to a shaky start. ACS pitcher Nat’s (ACS #11) inconsistency gave away several runs to their opponent. His catcher, Jon Lee (ACS #34) did his best to support his pitcher, with some hits and misses. RI’s only hit during the inning was made by Alexander (RI #77) who sent two of his teammates home.

On the other hand, ACS was unable to recover their run deficit in the second inning. The only player who was able to land on base, Ian (ACS #36), made an attempt to steal from first base to third base, after seeing that RI’s catcher made a wild throw over second base. Unfortunately, he overran third base and was subsequently tagged out.

RI took this opportunity to extend their lead. Yifan (RI #09) made a running hit to shortstop that gained him a single. He was advanced by Jiaming’s (RI #47) bunt and Max’s (RI #11) hit which allowed him to bring home a run. Max (RI #11) also managed to come home, ending the inning 6-1.

Despite their disappointing first two innings, ACS did not let up.

ACS vice-captain Harrizon commented: “Despite the almost defeated attitude we had at the start, we actually started coming back and the fighting spirit that everyone experienced was definitely a highlight of the game.”

During their third at-bat, ACS continued to consistently put the ball in play, which put pressure on RI’s defence and caused them to falter. Harrizon (ACS #25), who got on base through a walk, managed to score for his team when he made a bold steal to third, which induced a wild throw by RI’s catcher Audric (RI #03). Eldon (ACS #18) and Kwee’s (ACS #16) hits got them on base, while mistakes by RI allowed them to score.

When it was RI’s turn to bat, they fared well against ACS’s substitute pitcher, Vajon (ACS #23), with all the players making hits. Yet, ACS, rejuvenated from their comeback, managed to only let in one run which was scored by Audric (RI #03). The inning concluded with the score sitting at 7-4.

In the fourth inning, both ACS and RI managed to score a run each, with Daryl (RI #42) scoring the first and only home run in the game. J Lim’s (ACS #22) reckless steal to third base, in an effort to advance himself, unfortunately, caused his team to lose out on a run.

With high odds stacked against them, ACS could not turn the game around in the fifth inning, ending the game 5-8.

ACS captain Vajon (ACS #23) was satisfied that “the team managed to pull through and get out of the defeated zone”.

“We tried our best and that’s all that matters,” said the ACS captain.

Following the win, RI also remained cautious, saying that “many other schools are up to this level”.

“We shouldn’t be contented with this current score and we should strive to do better,” RI’s vice-captain Max (RI #11) added.

RI moves on to the semi-finals, while ACS’s final second round game with River Valley High School will determine which of these two schools will advance alongside RI.