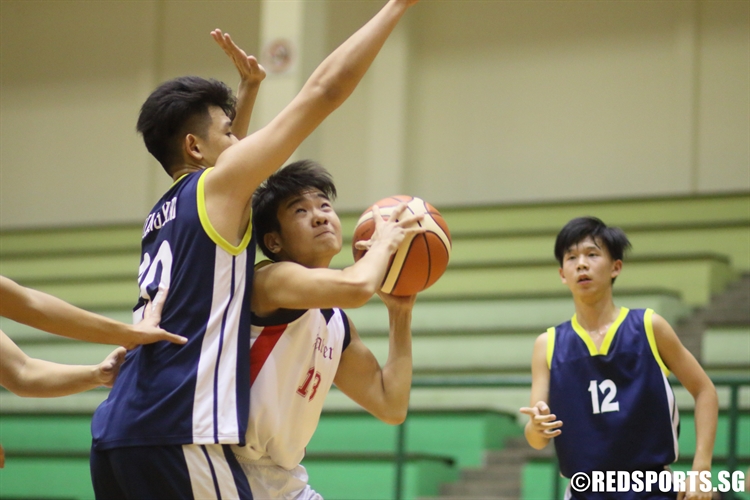 Calder Teo (ACSB #13) goes up for a shot as he is heavily guarded by his defender. He dropped a game-high 23 points in the win. (Photo 1 © Chan Hua Zheng/Red Sports)

Guangyang had just denied ACS Barker their sixth straight appearance in the final with an 82–79 victory in the semis this time last year, but a repeat was never likely from the start as ACS Barker came out with all guns blazing in the battle of the past two South Zone Champions.

“It was a good win and we trained very hard for this. I am very happy to win this time,” said Dervin Leiroy Rajandhran (ACSB #11) after getting better of the team that defeated them at this stage last year.

Exacting revenge on Guangyang definitely felt good for ACS Barker, but having the opportunity to win the title on the 1st of March – which happens to be ACS Barker’s Founders’ Day – was even more important.

“We wanted to play well in this game and get the win to advance to the final. The final will be played on our Founder’s Day and that was extra motivation for us. We want to win the title on our Founder’s Day,” added Dervin (ACSB #11) who scored 18 points in the victory.

Guangyang, who got a team-high 17 points from John Lacdao (GYS #4), had a decent start to the game; using an early 7–0 run to briefly lead 7–1 before ACS Barker started dominating proceedings.

Xavier (ASCB #28) commanded the paint as he scored 11 of his 16 points in the opening quarter with points off offensive rebounds and a few mid-range jumpers that caught nothing but net. Coupled with a few fast break lay-ups from the ACS Barker guards, the 2016 South Zone champions ended the 1st quarter with a 31–16 lead.

Both teams had kept proceeding tight in the 2nd quarter with ACS Barker protecting a healthy 14-point lead with roughly three minutes to go in the quarter. ACS Barker then threatened to run away with the game as they closed out the half on an 11–2 run which included nine from Dervin (ACSB #11).

Dervin (ACSB #11) connected on a left-wing three-pointer as the halftime buzzer sounded and sent the ACS Barker supporters into a frenzy. That gave his team a 23-point lead – their largest of the game – as ACS Barker led 51–28 at the half.

Guangyang displayed the true spirit of champions in the second half, refusing to give up despite ACS Barker’s imposing showing in the first half.

Brendan Lee (GYS #12) and John Lacdao (GYS #4) bagged six points each to spark an excellent performance for the reigning champions in the 3rd quarter. Guangyang played with renewed intensity, outdoing their opponents on almost every aspect of the game in the quarter but still trailed 47–66 heading into the final quarter.

Both teams could not keep up their performance levels in the final quarter as fatigue started to kick in. ACS Barker comfortably saw out the game to claim victory and will have a shot at winning the title on the school’s Founder’s Day.

With this victory, ACS Barker will make a return to the Championship Game – their sixth final in seven years – having missed out on a spot last year. ACS Barker remained unbeaten and currently hold an 8-0 win-loss record this season.

Dervin (ACSB #11) is definitely looking for a better outcome this time around. “I am looking forward to having fun and winning as we haven’t won the championship yet with this team,” he said.

The final will tip-off at 2.30pm on March 1 at Delta Sports Hall.