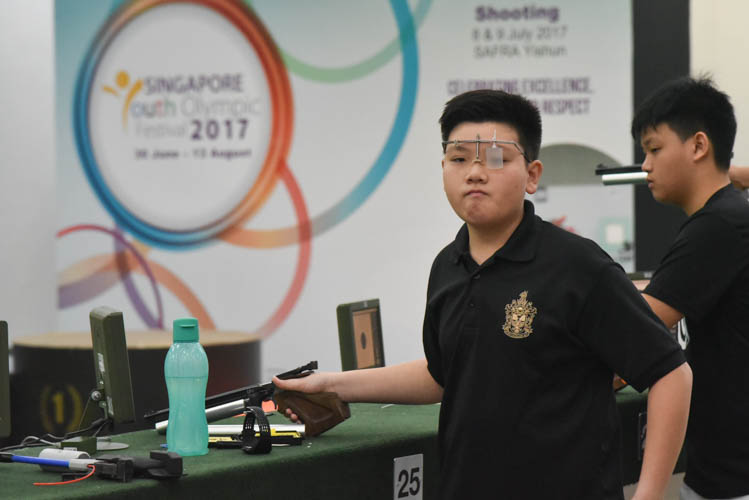 Chen Wen Di of RI reacting after a shot during the Air Pistol Men’s Y13 category competition, he came in first with a score of 507. (Photo 1 © Stefanus Ian/Red Sports)

Yishun SAFRA, Saturday, July 9, 2017 — Chen Wen Di of Raffles Institution (RI) clinched the 10m air pistol boys’ championship in a nerve-wracking finish that went all the way down to the last shot, winning by just one point as Hang Zizhou fell short.

The disappointment was clear on the face of Zizhou as he scored a 6.7 with his final shot. The St Hilda’s Primary School student said he felt tired towards the end of the competition but he still felt he should have done better with his last two shots.

“I didn’t know why but I just dropped my gun for the last two quotes, I messed up,” said the 11-year-old.

Despite missing out on gold by just one point, Zizhou said he is still “quite happy” with his performance.

“Actually I could have done better, but it’s already quite good, I improved from the last competition… by 28 (points) or something,” he added.

Zizhou’s score of 506 prevented an RI sweep with Yu Qi Yuan rounding off the top three with a score of 505 points. The third-placed Qi Yuan, had the highest score in a set across the three shooters when he shot 95 in the second set.

The two Rafflesians finished all their shots first and were clearly nervous as they stared at the scoreboard, waiting for Zizhou to complete his shots. Towards the end, they even stood up from their seats and walked behind Zizhou’s firing post to see how many shots the latter had left.

Wen Di admitted that he was a bundle of nerves during the tail end of the competition.

“I was really nervous with my fingers crossed,” said Wen Di after the competition ended.

Wen Di said he performed “badly” today adding that he was continuously adding up the scores while he was shooting. The 13-year-old said this was the most nervous he has ever been on a competition adding that he had never won by such a close margin.

“This was the closest competition for me,” said Wen Di.

Started in 2011, the Singapore Youth Olympic Festival serves as a continuation of the inaugural Youth Olympic Games that was held in Singapore in 2010. This year’s festival is the seventh edition and will feature 12 sports – badminton, 3×3 and 5×5 basketball, cycling, fencing, football 5s, rugby 7s, sailing, shooting, table tennis, taekwondo and beach and indoor volleyball.