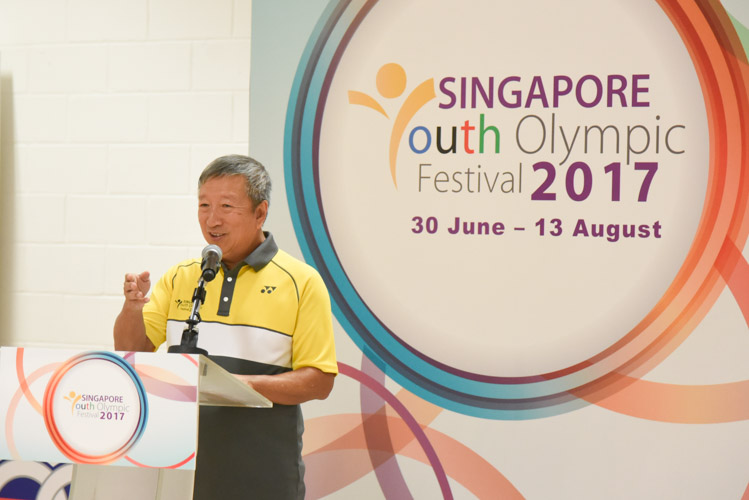 OCBC Arena, Friday, June 30, 2017 — The Singapore Youth Olympic Festival (SYOF) 2017 kicked off with a flurry of fencers fighting it out in the Boys’ Individual Foil and Girls’ Sabre categories with Matthew Lim and Heidi Loo winning their respective categories.

This year’s edition of the SYOF has a total of 12 sports on offer consisting of badminton, 3×3 and 5×5 basketball, cycling, fencing, football 5s, rugby 7s, sailing, shooting, table tennis, taekwondo and beach and indoor volleyball — two more sports than the previous edition.

The opening ceremony, held before the start of the fencing competition, began with an opening address by Ng Ser Miang, who sits on the International Olympic Committee executive board.

“We’ve been very encouraged by the response … as more and more NSAs are coming forward to ask to join this festival,” said Ng during his opening speech.

The two NSAs that have come on board this year are beach volleyball and cycling.

“This year, we have expanded the sports roster to include beach volleyball and cycling in the Singapore Youth Olympic Festival,” added Ng.

“The two NSAs involved are very enthusiastic to promote these events and we are happy to support them in their efforts. The increase in participation in recent editions has been very encouraging too. We hope this is a sign of continuing interest in sports among the youth in Singapore.”

In the opening event, Singapore Sports School’s Matthew Lim secured his gold medal in the Boys’ Individual Foil event as his schoolmates rounded off the top three positions. Lim cruised through the opening bouts without dropping a single bout before beating his schoolmate Paolo Cheung 15-6 in the final.

Meanwhile in the Girl’s Sabre category, Heidi Loo of Asgard Fencing Club came out on top as she went undefeated before beating Jean Koh 15-9 in the final. Loo said she did not do as well as she expected during the poules.

“Well in the poules, I didn’t do very well, like my standard was a bit off,” Loo said, adding that she dropped unnecessary points during her earlier bouts.

“I guess I was not very alert but after that I picked myself up.”

The fencing tournament will continue to Saturday before wrapping up on Sunday, July 2.