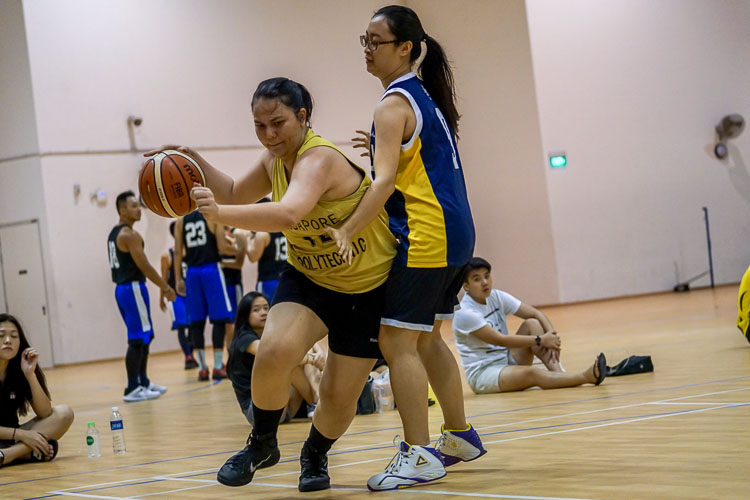 Mabel Koh (SP #7) knocked down a wide open 3-pointer shot to start the scoring for her team, followed by Lim Bei Xuan (SP #6) with another 3-pointer.

SMU started to tighten their defense, forcing a few turnovers from SP. SMU had great communication but lacked ball movement as they got caught up in trying to score instead of looking for alternative plays.

SP ran set plays and tried to create space but their defense was not as tight, resulting in loop holes for SMU to have a wide open shot.

The second quarter started with many SP blocking fouls which were a bonus for SMU. The highlight of this quarter was Bella Tan (SP#7) getting a steal and going for a fast break lay up.

However, SP continued to run their plays, making full use of off-ball screens and good ball movements to give themselves a 27-17 lead at half time.

Joey Tan (SMU #8) started the third quarter with a 3-pointer shot as SP became flustered and started having more holes in their defense.

Joey Tan (SMU #8) made a euro-step layup for the easy basket but Mabel Koh (SP#7) responded by knocking down a 3-pointer to widen the gap.

The fourth quarter started with SP making many forced shots. It was clear that both teams were now tired and the intensity dropped. SP played a safer defense, constantly containing their opponents without fouls.

SP captain Tiana Ng (#25) said, “This being our first competitive game since last year’s IVP, I would say that we lost a little bit of the competitive spirit and we’re a bit all over the place. However, this game helped us get used to the intensity of the game which was lacking for the past few months.

“I feel that we did not perform well defensively, giving SMU many open baskets which they converted and this was partly due to a lack of communication. We did better offensively by trying to share the ball with one another and shots were made. Though we did not play up to standard, I feel that we fought hard and we learnt a lot from this game and we will work on our weaknesses during the upcoming training.

“I’m really happy that this NYSI competition has been introduced as it allows us to gain more exposure by challenging universities which we may face only if we qualify for IVP. It is a great league introduced as there is a long period where they are no competitions until POL-ITE and players tend to struggle to adapt to the competitiveness after not being exposed to such levels of competition after so long.

“SMU played really hard and focused on attacking with their strengths. They had good ball movement and communication. In addition, they put up tough defense and did not let us get many easy baskets. They also had really good sportsmanship and helped our players up when they fell down after a tough hustle for the ball. We wish them all the best for the rest of their games.”

Captain Bella Tan (SMU #7) said, “Our team did really well. We went off season since the last SUniG (Singapore University Games) and this competition acts as a warm up for the next SUniG. Our team has many new recruits and some of the players did not have any basketball background before they joined the team and we were still able to put up a good fight against SP.

“NYSI (Basketball League) is a good initiation as there is only one tertiary competition where many teams do not have enough games for exposure and development. It serves as a preparation for our upcoming SUNIG.

“SP played really well as always, they are young and have a lot energy in them. They have speed and physical endurance which was to their advantage. However, my team did really well containing them and forcing them to make tough shots. Overall, I want to say good job to my team.”