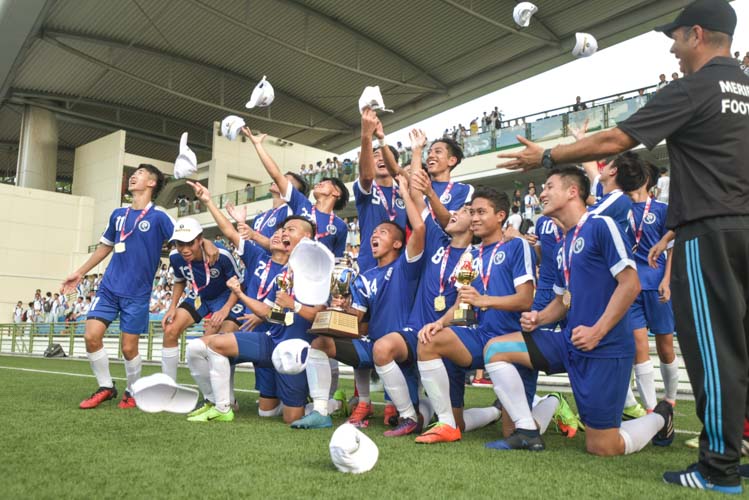 MJC took home their fourth consecutive title after a 3-1 win against VJC in the final match. The win was also the ninth in 13 years. (Photo 1 © Cheah Wenqi/Red Sports)

Justin Hui (MJC #4) emerged as the hero of MJC in the second half, as the captain scored a brilliant hat-trick in eight minutes to beat a resilient VJC who controversially had a player sent off in the opening minute of the second half.

An elated Justin spoke about his hat-trick: “I only dreamt of scoring one or maybe two goals. I never thought I would get three. But when the chance comes, you have to finish it, you have to kill the game and that’s what we did.”

The first half was an extremely physical affair with chances few and far between. The only real chance of the half fell to Justin Hui (MJC #4) who saw his free-kick well saved by the VJC goalkeeper.

MJC forward Nathanael Chan (MJC #9) then suffered a serious head injury after he had clashed heads with a VJC defender in the 19th minute. Play was stopped for nearly 10 minutes as medical staff rushed to the aid of the MJC forward and he had to be stretchered off the pitch. Royston Tan (MJC #10), who won the final for MJC last year, came on in his place.

The second half gave the 2,000 VJC and MJC fans possibly the most entertaining game of football in the A Division this season and it began with controversy.

Just one minute into the second half, VJC defender Marcus Tang (VJC #6) was given a second yellow and sent off by the referee after tripping MJC forward Justin Hui (MJC #4). The defender was earlier booked for his first foul, also just a minute after kick-off.

The VJC players, however, picked up a gear after the sending off.

Nicholas Teo (VJC #14) fired a free-kick just over the bar before Glenn Kweh (VJC #11) got behind the MJC defence but blazed his shot wide.

MJC soon capitalised on the one-man advantage as they broke the deadlock through a penalty on the hour mark. Malcom Tan (VJC #5) and Muhammad Syakir (VJC #10) failed to deal with a loose ball in the box and allowed the mercurial Justin Hui (MJC #4) to go through on goal.

He was then brought down by the VJC goalkeeper Kevin Wong (VJC #20) forcing the referee to point to the spot. Justin duly stepped up and converted the penalty low to the keeper’s right to give MJC the lead.

MJC were expected to go on and dominate the game but VJC had other plans with the decision to bring on Nicholas Chan (VJC #16) earlier eventually paying off.

In the 63rd minute, golden boot winner Glenn Kweh, who scored 18 goals this season, whipped in a peach of a cross from the left for Chan, who slotted it home to deservedly level the game at 1-1.

However, the sending off exposed VJC’s defence as they pushed forward to try and look for a winner.

A quick counter-attack saw MJC’s Justin receive the ball on the right near the touchline, surrounded by three defenders. But one stepover and a couple of body feints later, he somehow wriggled his way through three defenders and was through on goal.

The skipper then finished off the move by bending a left-footed shot into the top corner sending MJC fans into delirium and giving them a 2-1 lead after 66 minutes.

VJC then surged forward looking for an equaliser, playing with only two defenders at the back. But the plan backfired this time and they were victims to another quick counter-attack by MJC.

This time, substitute Royston Tan (MJC #10) nicked the ball off Malcom Tan (VJC #5) and ran down the left flank before teeing up Justin Hui (MJC #4). The forward shot high into the corner of the net to complete his hat-trick before running towards the thunderous MJC crowd to celebrate the 3-1 lead after 68 minutes.

In the space of eight scintillating minutes, the score had gone from 0-0 to 3-1 and the game was essentially settled.

VJC tried to come back into the game but as fatigue levels increased, chances were hard to come by. The referee finally blew the whistle to end what was the most thrilling game of the season.

After the game, VJC assistant coach Lim Wei Quan admitted that he was “absolutely surprised” with how quickly the referee issued the yellow cards that led to the sending off.

“And yet again who can fault him because it’s the law of the game. If he deems to apply it this way and interpret it, then we can’t say anything.”

For VJC’s captain Desmond Chia, he was full of praises for his team after the game: “They’re really a team that deserves so much more and I feel very disappointed that I wasn’t able to bring them the championship this year.”

“In terms of heart, today our team showed so much heart. Even going one goal down we came back with an equaliser and I’m so proud to be able to play alongside them.”