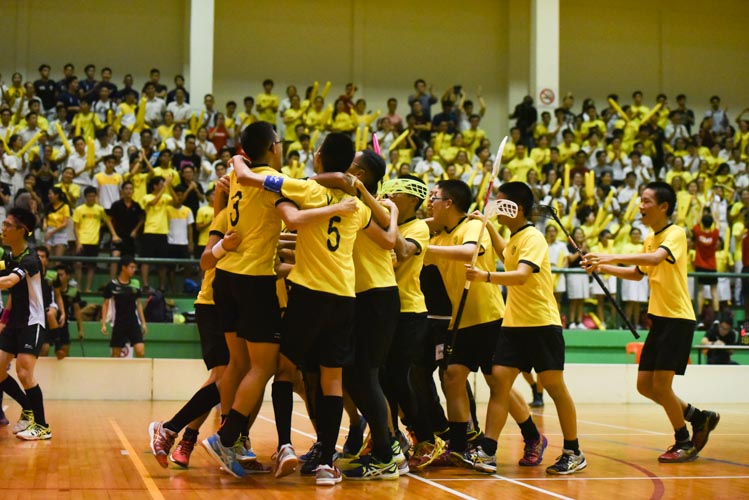 Both sides went into the final with a 100 percent win record, displaying their superiority in the earlier rounds with VJC scoring a whopping 83 goals in eight games while RI racked up 58 in seven.

They had also breezed through the semi-finals, with VJC dispatching Catholic Junior College 7-0 and RI seeing off traditional powerhouse Meridian Junior College (MJC) 4-0.

All factors pointed to a goal-laden spectacle in the final: the 5-2 scoreline is the highest in a final of this competition since VJC defeated MJC 6-2 in 2013 for their last title.

When VJC win a championship, they win it in style.

Said Dun Xian (VJC #5), “I think our team really played together, we came together, and we really had the desire since the start of the season. We named this season Redemption ’17 – because we lost to them (RI) last season in the semis, so this year we wanted to come back harder and get back our title.

“Today, our team showed a lot of character on the court. We played from the first whistle till the end, and I’m really, really proud of them.”

Five minutes in, VJC signalled their intentions when the ball fell nicely to Dun Xian (VJC #5), but his shot forced a great reaction save from opposing custodian Damien Wan (RI #16).

Two minutes after, VJC opened the scoring through Nicolai’s (VJC #3) long-range effort from the left flank.

RI tried to find a response, with their best chance falling to Ho Wei-En (RI #10) who struck from close range but was denied by goalie Afzal (VJC #75), while his second attempt went narrowly wide of the left post.

The start of the second period saw RI sprinting off their blocks, with a huge attempt at the equaliser just 10 seconds in. Teo Chee Hao (RI #76) and Tng Zong Wei (RI #88) took turns to test Afzal (VJC #75) from range, but the custodian denied them both times.

It was then opposing goalie Damien’s (RI #16) turn to display his reaction instincts, palming away an inadvertent deflection off Charles Goek (RI #17) from a VJC free-hit.

Five minutes 50 seconds into Period 2, Ryan Tan (RI #68) dragged a shot which crashed against the crossbar, to groans of disbelief from the Raffles faithful. He was left to rue that miss, as namesake Ryan Tham (VJC #9) doubled VJC’s lead 20 seconds later with a drag shot of his own.

RI hit the panic button, with Charles (RI #17) almost costing his team with a defensive error, allowing Koh Wenjun (VJC #14) to steal possession only to blaze a shot over the bar after some nifty stickwork.

It did not matter to Wenjun (VJC #14) though, as he racked up two goals later to help VJC run riot with a 4-0 lead.

The last few seconds of the second period were pure madness: after Wenjun’s (VJC #14) two goals with 1:30 and 0:37 left on the clock respectively, RI pulled two goals back in double quick time – all in the space of 21 seconds.

Chee Hao (RI #76) succesfully rode his luck from range 27 seconds from time, while Wei-En (RI #10) met a looping ball from the left then smashed it home in front of goal with 16 seconds left. The Raffles supporters were off their seats, with a possible miraculous comeback looming.

VJC were not about to let up, as they continued to attack and found the net for the fifth time – but it counted for nought as the clock had already ticked down to zero.

They did add a fifth goal within 45 seconds of the last period, fittingly via captain Dun Xian (VJC #5) who capitalised on an RI defensive lapse. He found himself with only the ‘keeper to beat, and he duly took the chance.

That proved to be the nail in the coffin as RI failed to find a way back thereafter.

Said VJC’s Ryan Tham (#9), “After we scored the four goals, I think we were a bit complacent, which led to the two easy goals that RI took the chance to score. But after the second period, our coach and captain really motivated us and told us that in our minds, the score was still 0-0.

“The game hadn’t been won or lost – we had to start the game all over again in the third period, because anything could happen just like the two goals that they (RI) scored. So I think we came into the third period even stronger than how we started the game.”

Added captain Dun Xian (VJC #5), “After the match, it was just a really good feeling. It’s really satisfying, because they (RI) beat us last year (in the semis), and now it was our chance to beat them. So I would consider it revenge for us.”

Dun Xian also downplayed the role of the goalscorers and attacking players, and instead lauded goalkeeper Afzal and the defenders’ showing.

“It’s ultimately a team performance,” he said. “I am really proud to say our goalkeeper and defenders communicated so well – they kept our defense really, really compact so Raffles were unable to penetrate us. A good attack always starts from a good defense, and I’m really, really proud of my defense today.”

Meanwhile, RI coach Jill Quek was pleased with her team’s effort but rued their sub-standard performance on the attacking front.

“They fought really hard till the last whistle and I’m proud of them,” she said. “However, definitely there are things that we have to look upon: the way we played could’ve been better, there were some really unforced errors. With our chances, we could have converted, but we didn’t take them.”

Giving credit to the newly-crowned champions, she added, “VJC did a very good job – they played fiercely, and they took their chances well. They were the better team today.”