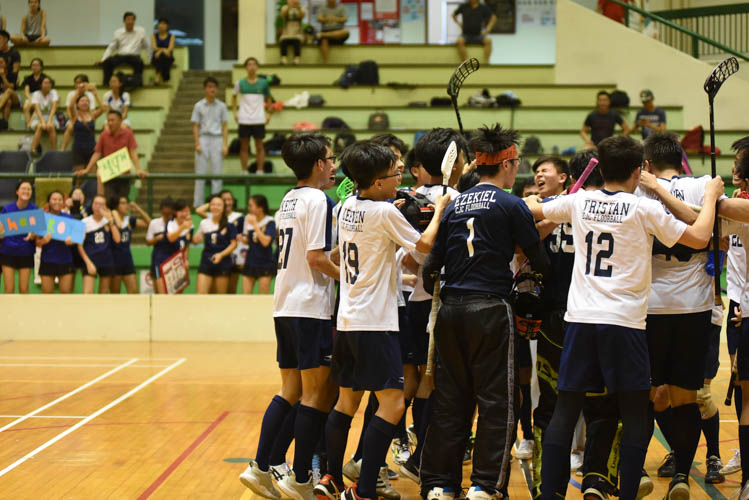 CJC’s floorball team ran onto the court after the match ended 3-2 in their favour as they clinched third place in the National A Division Floorball Championship. (Photo 1 © Stefanus Ian/Red Sports)

CJC – who started a floorball co-curricular activity (CCA) only four years ago – had reached the semi-finals for the first time ever in the boys’ competition, where they fell to a 0-7 defeat to eventual champions Victoria Junior College. The CJC girls had come in fourth last year.

Recovering from that semi-final loss, the CJC boys clinched third place after stunning traditional powerhouse MJC – who had lost 0-4 to Raffles Institution in the other semi-final – through goals by Tristan Yeo (CJC #12), Tan Yi Xuan (CJC #21) and Benjamin Yeo (CJC #6).

Singing praises for his team, CJC coach Muhammad Rozaidi, who only started coaching them this year, said, “They really proved everyone wrong. They were the underdog team, but they worked really hard and earned the bronze medal, so congrats to them.”

CJC captain Roy Cheng (#44) also agreed that they had gone beyond expectations to clinch third place, saying, “MJC has been renowned for their good coach who came from overseas. Coming from a native floorball country, he knows the game well and he’s really good at structuring the team. That’s why today I felt that even though there was a disadvantage (for CJC), we managed to counter that and we were able to play our own game.”

Under the tutelage of Swedish coach Filip Dahlgren – who pioneered floorball in Singapore – MJC were champions from 2010 to 2012, and had since maintained at least a top three placing (third in 2014 and 2015; runners-up in 2013 and last year).

Unlike their seniors from years past, the MJC players are of comparably smaller stature and they struggled to cope with CJC’s more aggressive play.

The first period proved to be cagey, as both sides opted to be patient in their build-up play.

It was a different story in the second period, as the dam burst as soon as the floodgates were breached. CJC raced to a 2-0 lead within two minutes of the period, via Tristan Yeo (CJC #12) and Tan Yi Xuan (CJC #21).

Tristan (CJC #12) struck sharp and low from outside the attacking semi-circle, as the ball made contact with MJC custodian Aaron Lim (#1) before trickling in. 51 seconds later, Yi Xuan (CJC #21) dragged a sweet strike from long range to double the lead.

MJC’s efforts finally saw a tangible reward when Joel Sim (MJC #10) pulled a goal back with 35 seconds left in the second period. After a goal-mouth scramble where Ezekiel (CJC #1) pulled off two great saves, the ball looped over him as Joel (MJC #10) tapped it into an empty net.

Unfortunately, MJC had no time to build on their momentum as the whistle was blown for the three-minute interval shortly after.

But barely four minutes later, Joel (MJC #10) sent an effort from range into goal, scoring his and MJC’s second as the deficit was reduced yet again. It cued rapturous cheers from the Meridian faithful, who sensed that the game was still there for the taking.

Frantic scenes ensued in the final 10 minutes, as the game saw breathless end-to-end action with MJC seeking the elusive equalising goal. They racked up chance after chance, but CJC custodian Ezekiel (#1) proved to be a rock between the posts.

If the preceding nine minutes were frantic, the last minute was madness as MJC brought on an extra attacking player in place of the goalkeeper, piling extra pressure. MJC left it all on the line, as the crowd held their breaths whenever CJC counter-attacked with the goal gaping.

Alas, CJC held on to seal the highest position they have ever achieved in the competition.

“From what I saw today, everybody was together,” said CJC captain Roy (#44). “They weren’t disparate in their mindset and how they played. Honestly, in the past few games, they were not on form, they didn’t turn up on the day. But today everyone brought the team together – by cheering for each other, by communicating even the little things, like helping each other refill bottles. I felt that these simple things really helped us today.”

Roy, together with CJC teammate Alven Koh (#10), was part of the Catholic High School B Division-winning team in 2015.

Roy added, “I felt that because I had a really good coach in Catholic High, whom I learnt a lot from, I managed to transfer all the teachings – all down to the basics – and pass on to the newer players (in CJC), which is why we were able to improve as much as we did until today.”

“My team really improved, I must say. We thought we were the bottom of the barrel, but today we emerged third, which is a real surprise for us. But then again, we worked really hard for it. We just gave it our all, and it wouldn’t have mattered whether we won or lost today.”