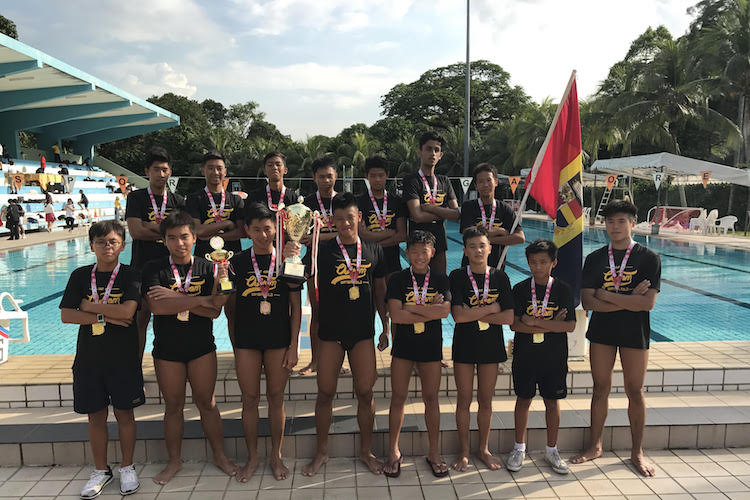 Outram Secondary clinched the National B Div Water Polo Championship for only the second time in their history after they dethroned Anglo-Chinese School (Independent) 8-7. It was also ACS(I)’s first defeat in six matches in this year’s competition. (Photo © Clement Tan/Red Sports)

PSOEB, Evans Road, Monday, March 27, 2017 —- Outram Secondary School are the National B Division Water Polo champions for only the second time after they dethroned Anglo-Chinese School (Independent) 8-7 in a tightly contested final.

In their final attack in the last 30 seconds of the game and trailing by a goal, ACS(I) could only muster a shot that skimmed the crossbar. It was also ACS(I)’s first defeat in six matches in this year’s competition.

The two teams had gone into the final quarter tied at five goals apiece, with Outram having clawed back a 1-3 deficit at one point in the first quarter. Then Outram’s captain Zander Widjaja (#10) gave his team the lead for the first time in the match from close range a minute and a half into the fourth. It turned out to be a lead Outram never relinquished.

“We were the underdogs, so we didn’t have to deal with the pressure coming into this game,” said Outram’s coach Kuah Kar Huat, who said before the final that his team stood a 30 to 40 percent chance of winning. “I told the boys to be patient, but to not be afraid when they carve out clear-cut chances of scoring.”

Kar Huat’s caution was perhaps understandable. ACS(I) had not only defeated Outram 11-7 in this year’s preliminary round-robin competition but also won 5-3 in last year’s B Division final.

Perhaps with that on their minds, the Outram boys started tentatively, moving the ball rather slowly around the opponents’ half. Outram were helped though by some wayward shooting from ACS(I) throughout the final.

In contrast, Outram scored some outrageous goals at crucial moments of the game that triggered loud cheers of delight from their army of supporters in the stands.

Late in the third quarter, Zander lobbed ACS(I) keeper Declan Sow (#1) from around outside the four-metre line to tie the game, his first of two goals and one that rattled the ACS(I) boys.

Lum Jing Hao (#2) scored Outram’s eighth goal and his third in similar fashion in the fourth to kill off the come-back from ACS(I).

Outram’s goalkeeper Sai Dinesh (#1) also made some eye-catching saves. In particular, he dived to his right to keep out a shot right near the end of the third quarter to keep the score at 5-5.

“I don’t know about my teammates, but all I wanted to do was to have a good game,” said Outram captain Zander, who was also part of the team for last year’s final. “I have always been fretting about things I would do right or wrong, I was just so sick of playing like that.”

Outram’s win this year was only their second ever, after winning their historic first in 2013 by also beating ACS(I), which has been the dominant water polo school. Other than Outram, Anglo-Chinese School (Barker Road) was the other school to have won the B Division title in at least the last decade.

“Our shooting was just not good enough today,” said ACS(I) coach Luo Nan after the match. “But all credit to Outram, they held steady. This is the final, so there’s the pressure that comes with everybody coming down to watch them.”

“My boys are still quite understandably upset, but that’s life and sometimes you lose. They will need to learn to come back from this,” he added.