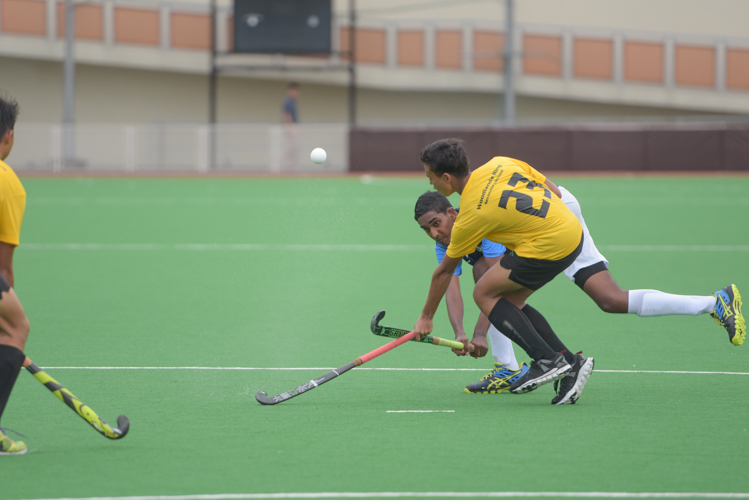 Sengkang Hockey Pitch 1, Monday, March 20, 2017 — With nothing but pride to play for, St. Joseph’s Institution (SJI) and Woodlands Ring (WR) Secondary School played out a six-goal thriller where the former emerged 4-2 winners.

Heading into the Group X tie, both teams were already knocked out of the National B Division Hockey Championship and the game was to decide who will finish third in the group.

The dead rubber match did not take long to come alive when Woodlands Ring went 1-0 up as soon as the fourth minute. Darren Ong (WR #13) latched onto a short corner and drove the ball high into the back of the net, far beyond the goalkeeper’s reach.

However, Woodland Ring’s lead only lasted for two minutes. A mazy run from Rizq Dagfal (SJI #21) left a trail of defenders behind him and he squared the ball to a lone Yang Yuan Feng (#5) who made it 1-1.

SJI adopted a high pressing tactic to penetrate the opposition half. Possession was key in their play as they looked to spread the ball down the flanks and have their forwards cut inside. This approach resulted in a chance for Rizq when he danced around the left flank and sharply turned inside to make it 2-1 heading into halftime.

In the second half, Woodlands Ring shored up their backline and closed up gaps to avoid the SJI forwards getting in behind. The plan was to not concede and break on the counter to grab an equaliser but the opportunity to charge forward proved elusive for Woodlands Ring.

Woodlands Ring defended resolutely for close to 20 minutes but lapses in concentration allowed Yuan Feng to net twice in the next five minutes to make it 4-1 and complete his hat-trick.

Hat-trick hero Yuan Feng was in a bittersweet mood after the game. The 16-year-old captain said: “The hat-trick was a good moment but I’m still bummed that we didn’t qualify for the semi-finals. This match will always be a memorable one for me because it’s my last match for the school.

“I gave it my all and I’m quite satisfied with my performance today. It would’ve been nicer to have qualified to the next round but I’m still proud of all the players because we fought really hard today.”

Woodlands Ring coach and 2015 Southeast Asia Games hockey silver medalist Farhan Kamsani said: “It was an intense match but skills-wise, Woodlands Ring are still not there. Moving forward, though, the boys have set the bar quite high for the juniors because they performed quite well throughout the tournament.”

“To finish in the top eight is an amazing feat and we can only improve the team from this point on. The boys have shown how hungry they can be and if the next batch continues to work just as hard, we could even aim for a spot in the semi-finals next time.”