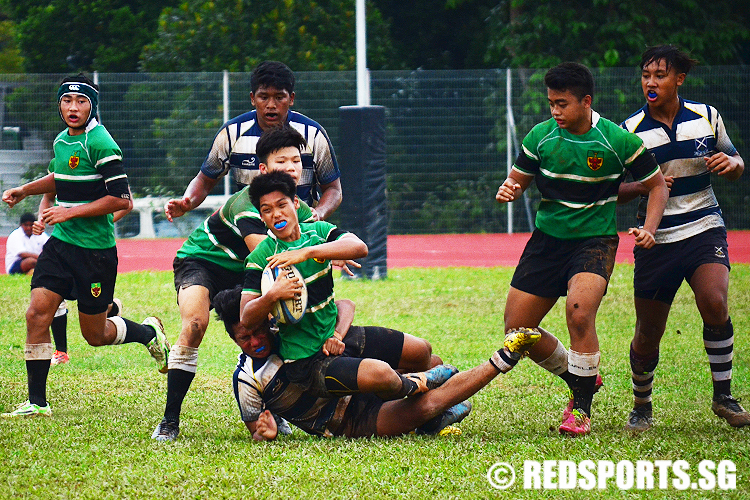 The win gives RI their first final appearance since 2012 when they lost 7-15 to the Saints. The result also meant St Andrew’s will miss out on the final for the first time since 2013.

Before the match kicked off, most neutrals would have pinned 24-time champions SA to breeze past RI, six-time title winners themselves, but whose last title came in 1991. After all, Saints had beaten the Rafflesians 42-7 in Round 1.

However, it was the RI underdogs who were firing on all cylinders in the first half. They were the ones piling on the pressure and their full-on aggression was crucial in RI retaining as much possession as possible.

It was SA though who struck first blood through Chua Wei Li (SA #4) as he scored the all-important first try but the Saints’ spirits were quickly deflated when Izaac Tay’s (RI #6) try brought the tie level at 5-5 into halftime.

In the second half, RI quickly raced to a 10-5 lead when Jordan Poon’s (RI #16) lung-bursting run from one end to the other gave the Rafflesians the opening they needed to regain their momentum. Bervyn Wong (RI #25) converted to increase the lead to 12-5.

RI coach Teo Kai Hock rushed onto the field to celebrate with his players once the final whistle blew.

Said coach Teo: “Our players played well. Both the teams wanted it (the win) but the odds were in our favour today and the better team came out on top.

“We broke down the game into four quarters and in each quarter, we had a game plan. We played to our strengths and weaknesses and executed our game plan accordingly. It was an evenly matched tie but RI were just the tougher team today and we defended very well.”

Captain and first-time finalist, Gideon Kee (RI #7), was visibly overjoyed with the victory, saying: “Today’s result was real close and both teams did their best. Hats off to the Saints because they did so well. Despite making some mistakes, we pressed on and worked hard throughout. That’s why we won the game.”

“Raffles deserved the win and they forced us to succumb under pressure. We played poorly and made a lot of mistakes. We had plenty of chances to score but we couldn’t capitalise,” he said.

RI will now do battle against defending champions Anglo-Chinese School (Independent) on March 29 at Evans Road where they will seek to win their first B Division crown since 1991.