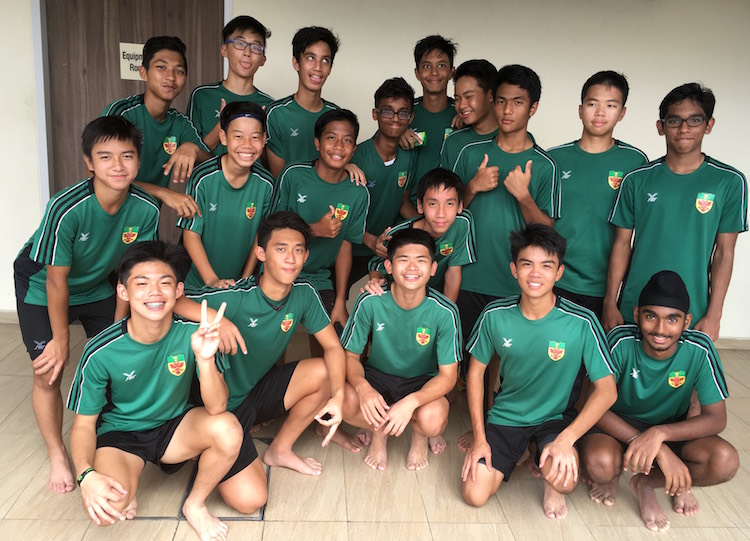 This opening Round 2 win puts RI firmly on top of Group X.

Despite the scoreline, it took RI almost 20 minutes to break down a mean Woodlands Ring’s backline. Goalkeeper Anas Mu’tashim (WRS #40) put on a spirited display throughout the match, blocking most shots that came his way, and he was a big reason in keeping the scoreline low.

The Rafflesians only broke the deadlock in the 18th minute through Muhamad Raziq (#9). Latching on to a long pass from midfield, the 16-year-old stood his ground and directed his low shot to the far post to make it 1-0. That goal proved to be the catalyst RI needed to begin their onslaught.

Three goals followed in the next 12 minutes.

Raziq (#9) turned provider when his lateral ball found Syaquille Izzad (#27) for an easy tap-in in the 24th minute.

The second half was no different as RI continued to pile on the pressure. Clad in dark green, RI pressed high up the field and forced the red-wearing opposition to defend. The only way Woodlands Ring could get forward were through quick-fire counter-attacks down the flanks.

Favouring the right side more, Woodlands Ring worked hard to find a way down the pitch and Darren Ong (#13) proved to be a livewire. The playmaker was instrumental in distributing the ball to his teammates and ran tirelessly around the opposition half.

However, Woodlands Ring efforts were not enough to inflict damage on RI as they conceded three more goals in five minutes. Muhammad Haikel (#17) and Ethan Tan (#7) took advantage of gaps in the middle to score in the 18th and 20th minute respectively, while Muhammad Aqil (#16) notched another to complete his brace three minutes later.

On the victory, RI captain Joash Tan (#11) said, “I’m glad that the boys played to our standards today. In the last few games in the previous round, we didn’t play as well as expected despite winning. I hope this return to form spurs us on to continue winning the other matches.”

RI coach Ahmad Bakri also agreed, saying, “The players really came out today and played well. But there’s still room to improve because in the first 10 or 15 minutes, we lost focus and our play was messy.

“I told the boys to play it short and avoid long balls because it was important to keep it simple and not risk possession against a hardworking Woodlands side.

Whenever they had the ball, Woodlands managed to come across to our goal area two or three times. Despite the scoreline, I want to say that the Woodlands boys honestly did their best and never gave up. They made it tough for us and put up a good fight.”

Woodlands Ring coach Farhan Kamsani said, “The standard between the two teams is quite far apart but our team managed to stick to the game plan and play what was expected of them.

“The goals were going in because of all the pressure being put by Raffles. Our boys were defending well for a long time but when that happens, they’ll eventually lose concentration and falter near the end.”

Going forward, we’ve to play St Andrew’s (Secondary School) and St Joseph’s Institution – two tough games but the season is not over for us so we’ll continue working hard.”