IVP Bball (Women): TP go down against SIM in thriller 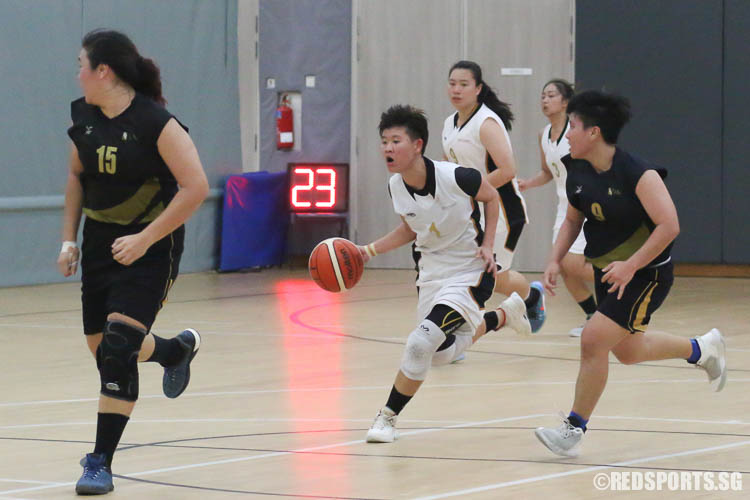 TP started aggressively, penetrating the SIM defenses to take the lead. TP’s ball movement was smooth, allowing them to find loopholes. SIM were not able to keep up with TP’s intensity in the first quarter.

SIM were able to find their momentum in the second quarter. Centre Pauline Ang (SIM #15) was able to pull off many shots with her strong post moves.

Tung Kah Hui (SIM #1) made a crossover to ankle break her opponent before scoring a 3-pointer shot to dampen TP’s morale.

SIM were able to outscore TP 23-17 in this quarter to take an overall 35-32 lead into the half-time break.

TP started to slow their attacks to allow themselves to analyse the game better. They showed strong team chemistry when Sharon Lee (TP #8) did a crossover move and made a no-look pass to Shirley Long (TP #13) who sank an easy under basket.

TP were able to close the gap and ended the third quarter one point behind at 46-47.

TP upped their defense in their fourth but it backfired as they started giving away fouls. SIM, slowed the game down, making their passes count.

With 2 minutes to go, TP were down by just one point when SIM were awarded three free-throw opportunities. SIM widened their lead to two points (54-52).

With 30 seconds left on the clock, Jacqueline Chu (TP #1) made a jumper to tie the game. However, SIM scored two free throws with 15 seconds left to seal the 58-56 win.

Captain Janice Ong (SIM #9) said, “I personally feel that our team did not play to expectation as we were not able to make our shots count and we committed too many silly turnovers.

“TP on the other hand played well on their transition offense and managed to fight for most of the rebounds.

“We definitely have to work more on our communication and make the flow of our passes to each other smoother so as to have better opportunities.”