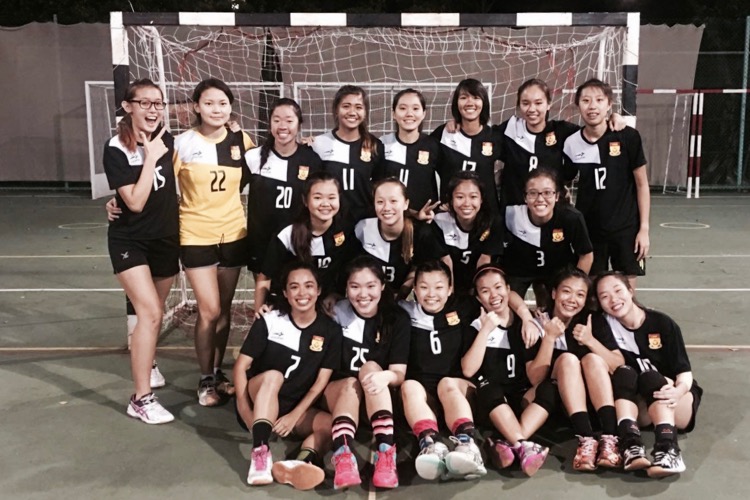 POL-ITE Handball was called off last year due to the presence of haze.

The first half, which was played two weeks earlier, saw the teams tied 6-6 at half time.

Nadine Chua (SP #9) scored a penalty goal to give her team the lead in the second half. However, NP came back with three consecutive goals to take the lead.

SP improved on their defense and were able to make quite a few successful clamps to fluster NP and block their shots.

The keepers from both team were also able to block many shots, leading to cheers from their respective benches which helped keep their team’s morale up.

Captain Kasandra Anika (SP #7) said, “During the first half, we were not able to perform to our standard which made everyone on our team rather upset.

“However, we managed to play the second half with a more hyped spirit due to a good 2 week break. This time, we were able to play to our 101 percent. We’ll usually have a few top scorers but this time, everyone gets to score and this is due to our improved teamwork.

“NP played really well today and they put up a really good fight. They were able to put up quite a few good plays.

“We used to have a handful of national players in our team thus we were able to clinch the championship title easily, but this year, we only have one national player. Our training definitely helped as our girls managed to learn so much from mistakes and play even better on court.

NP captain Cheryl Seah said, “We did pretty good despite falling short. We only had 2-3 months worth of training due to the absence of a coach in the initial phase. Although we only had a short duration of training, we managed to pull off such results.

“SP played to their usual standard, putting up a tight defense which caused many turnovers for us.

“We managed to bond through a 3-day camp before our competition. Through this camp, we managed to connect even better as a team. We trained hard and bonded a lot.

“All I have to say is that I am very proud of my team regardless of the results. They have fought so hard for the team and it is time for us to celebrate.”