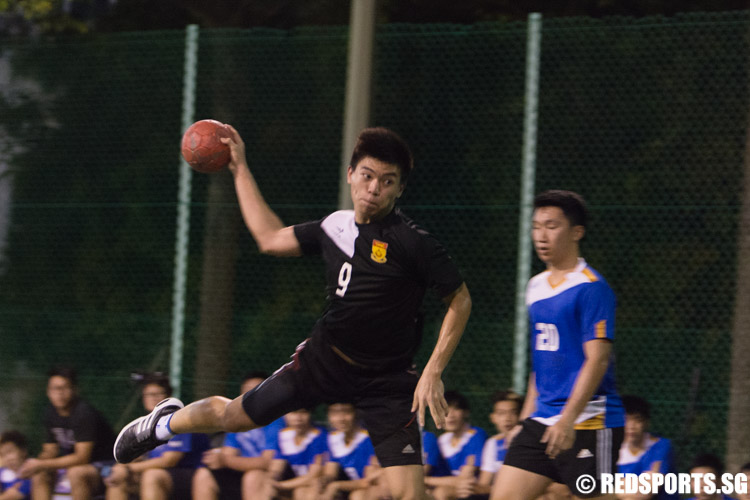 POL-ITE Handball was called off last year due to the presence of haze.

The game started with SP having the first possession. They started off slow, making passes along the 9m line to test NP’s defense play. They managed to find a loophole through the defenses and made a 7m attempt for the first goal of the game.

NP then responded with a 9m wing shot to tie the game. Both goalkeepers stood out with four shots each just five minutes into the game.

NP managed to intercept SP passes to score another two goals to lead 3-1. However, SP started to make defensive plays to stop the NP scoring streak, going on a four-goal run to lead 5-3.

Aggressive play from both teams saw NP and SP players given yellow cards.

Second half started with NP making more attempts but the SP keeper was able to block them. However, SP were not able to stop Chong Yao Hui (NP #1) from scoring three consecutive goals to tie the game at 16-16.

However, SP scored from wing shots to take the lead once again, eventually holding NP off to win 22-20.

Captain Tan Ren Hao (SP #10) said, “The thing that helped lead us to our victory is definitely the good team spirit as they cheered us on.

“It wasn’t easy for us to reach where we are but we are thankful for our coach, Su Pei Luan, and seniors, Jeremy and Yong Rae, who took time off just to guide us and help improve our skills.

“We know we still have room for improvement which includes making our goals count. We missed quite a few attempts for this game and we surely have to improve on this aspect.

“We are just proud of our team for keeping their cool despite trailing behind and that we fought hard for each other. We fought hard for this bunch of brothers and definitely not the medal or trophy.

“NP put on a great fight, it was a good match given by them and we managed to learn many things from them.

“We are just glad that we managed to create a special bond between our team ever since the trials. This special bond is also a key factor which led to this victory.

“Lastly, I have to really thank all the supporters that came down as they acted as a motivation for us to continue fighting.”