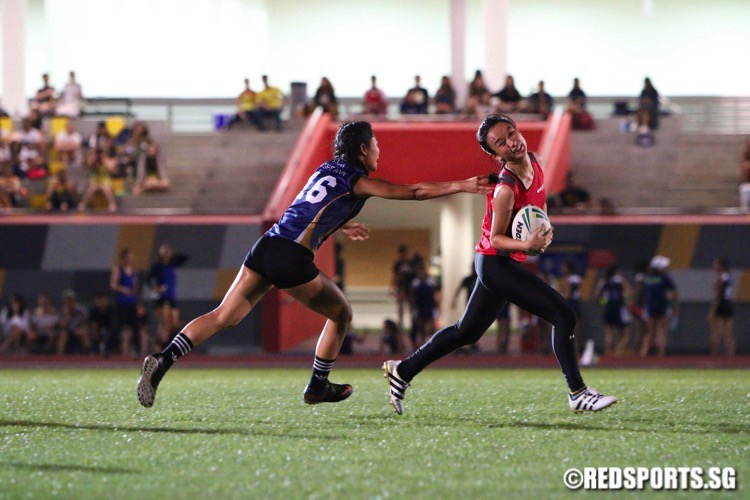 The Championship was called off last year due to the haze.

SP scored the first touchdown to take an early 1-0 lead but NYP came back and cut through the SP lines to score seven straight unanswered touchdowns.

Captain Crystal Khoo (NYP #1) said, “I felt that our team gave all out and fought hard today. This being our first game of the season, we really didn’t know what to expect from the other teams.

“SP put on a great fight today and we actually expected it to be a close game. We definitely have to improve more on our team play as touch rugby is not just a solo game, it takes the whole team to win the game. We also have to keep up with the intensity of the game as well.

“We have our eyes set on being the finalist but we know that we still have a long way to go.”

SP captain Chan Jie Min (SP #3) said, “I guess we were too nervous as this is our first game of the season and our team is made up of many young players.

“Our whole team knows that we did not play to our potential and that we can play better. I guess what we have to do now is to improve our plays and defenses.”

NP got the first touchdown through Anika Nale (#7) who made use of her speed to break through to score against TP. Just before the half time whistle, Mavis Tan (TP #8) made a dive to make it 1-1 at half time.

With TP growing in confidence, Lydia Ng (TP #1) eventually managed to find a loophole in the NP defense and penetrated to score the winning point for the 3-2 victory.

Captain Mavis Tan (TP #8) said, “Our team was very nervous but I kept reminding them not to let the nervousness break us down. We were very tired but I am glad that as a whole team, we managed to push on and fight until the final siren went off.

“NP put up a good game, they pushed to their best and they made quite a few good runs. This acted as a form of motivation for our team to further press on.

“We have to learn and improve from the mistakes we made today so as to get even better and prepared for the rest of our games.”

NP captain Vanoha Chiam (NP #9) said, “Our team improved greatly. We knew that we had it as the flow was good and that we were able to drive hard. We made some small mistakes which cost us the victory but we know that we can learn from it.

“TP gave a good fight and they were able to make very good attempts.

“We have to improve on our flow as a line. Communication is also a thing that we have to work on further. We definitely would want to go as far as possible and we are willing to work hard for it.”

The final game of the night saw RP dominate ITE with an 8-0 victory. RP had a high level of intensity throughout the game, as they kept ITE in their half for long stretches.

Maria Mendoza (RP #11) scored twice while teammates Nursya Umairah (#7) and Zayyana Filzah Zainula (#13) had one touchdown each to give RP a 4-0 half-time lead.

ITE had a better second half as they managed to stop quite a few RP attacks, but RP had better stamina as a whole and four more touchdowns from Winnie Chan (#16), Zayyana (#13), Nur Liyana (#10), and Nursya Umairah (#7) capped off an 8-0 win.

Captain Fionn Chay (RP #6) said, “We need to make improvements on both our offensive and defensive segments. As for offensive, we have to communicate more while defensive wise, we have to provide more support to ensure that there will be no gaps.

“We were able to win this game as we know how ITE play and we made use of this knowledge. They made quite a few hard runs and their attempts were good.

“As we get back to training, we will have to look into our mistakes and improve even further to reach our goals.”

Siti Hana (ITE #12), captain of ITE, said, “This game was a disappointing one as we know that we can do way better than this. We were nervous and we were not able to play to our usual standard.

“RP played really well, they had a strong line of defense and that they made many hard runs which we were not able to stop. I guess the main thing that led to our defeat was our low stamina as compared to RP.

“We have to work more on our communications as we were lacking in it throughout our game and we have to work even harder so as to prevent easy touches.”

NP next play SP, RP will go up against TP, and ITE will face NYP. The first game starts at 7pm, on Wednesday, November 2, at Temasek Polytechnic.