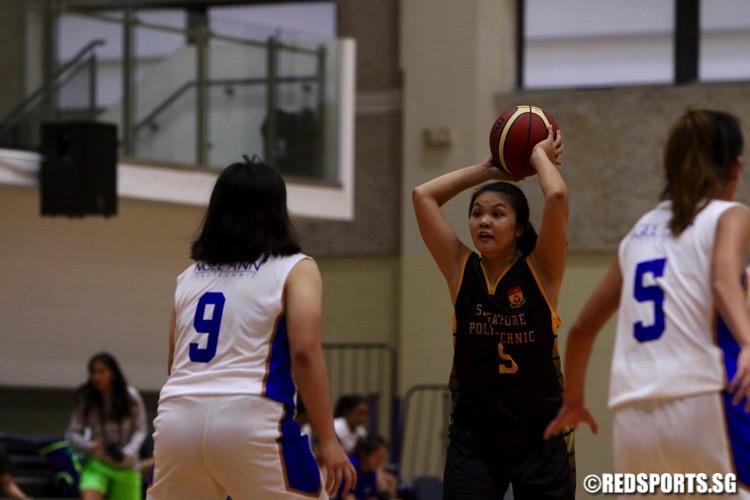 ITE College West, Thursday, October 27, 2016 — Singapore Polytechnic (SP) secured their second win in as many games when they beat Ngee Ann Polytechnic (NP) 37-26 to improve to a 2-0 win-loss record in the Polytechnic-Institute of Technical Education (POL-ITE) Women’s Basketball Championship.

Tiana Ng (SP #35) scored the first basket in a game where both teams played aggressive offense.

Despite not having key player Jayne Chan (SP #3) on court because of concussion, SP were still able to fend off the NP offense.

In the first quarter, NP had a tough time trying to break through the SP defense and made fewer shots.

SP on the other hand were able to make almost all of their attempts to give themselves a 4-point lead (10-6) by the end of the first quarter. Both Amanda Ng (SP #17) and Lee Yu Zhen (SP #9) managed to score a lay up despite being fouled, earning them a free throw each.

In the second quarter, NP put up on a tougher defense which managed to stop SP from scoring as many points, with Leong Le Yi (NP #5) stealing a ball and finishing with a fast break lay up.

Just as NP were slowly taking over, Tiana Ng (SP #35) scored a 3-pointer to give SP the lead once again. The quarter concluded with SP leading 20-14.

NP changed their plays to focus more on their inside game in the third quarter, as they secured more rebounds and used them to their advantage. SP responded with a full-court press, and Lim Bei Xuan (SP #14) was able to get a steal to score on a fast break lay up despite facing two opponents.

However, it was Melissa Mok (SP #15) who stood out in this quarter with two monster blocks in a row. SP ended the third quarter still in the lead at 25-19.

The final quarter saw both teams take their plays at a slower pace. Both teams were anticipating their opponents’ moves as they dribbled past the half court line. NP were tiring but Chan Xin Yi (NP #4) scored a 3-pointer to boost her teammates’ morale.

There were many fouls and timeouts in this quarter, flustering both teams. SP started to make turnovers and NP made use of them to score. Leong Le Yi (NP #5) managed to finish with a finger roll against three players.

Lim Bei Xuan (SP #14) said, “Even though we won today, we did not play as well as our usual standard. We definitely have to work more on our box outs, rebounds and shots.

“NP played relatively well today. They were able to put up quite a tight defense which caused us to not make many attempts.

“As a team, we have to be more confident in playing, make more attempts, play more as a team and most importantly, enjoy the game.”

Leong Le Yi (NP #5) said, “I felt that our team played much better than our usual despite losing the match. We were able to perform well except in the last quarter where we made many turnovers which caused us our loss.

“SP on the other hand didn’t play at their usual standard but they managed to wake up during the last quarter where they put up a really tight defense which contributed to our turnovers.

“We definitely have many things for improvement such as our passes and our ball movement has to be more smoother and faster.”

NP will face NYP next while SP will go up against TP. The first game starts at 6pm, on Monday, October 31, at ITE College West.