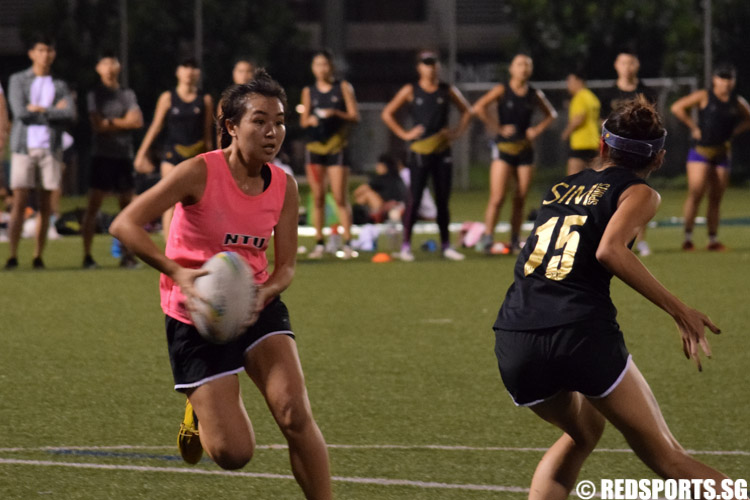 NTU drew first blood through Madeline Ong (#18). SIM was indifferent to conceding first, levelling through Adelin Ang (#5) just 1min 43sec later. Both teams showed glimpses of brilliant passing but the half was marred with misplaced passes and unnecessary turnovers.

SIM captain Leow Sue Yee (#6) said, “We have new players but the bulk are experienced players from last season.”

And the experience of the SIM side prevailed as they capitalised on NTU’s mistakes, with Celeste Loh (#4) and Clara Teo (#17) scoring two tries in the span of two minutes, to sign off the first half with a 3-1 lead.

Going into the match, both NTU and SIM had a perfect 2-0 win-loss record. Although both are already through to the final, neither were willing to lose their winning streak.

While the second half started just as intensely as the first one ended, the pace got visibly slower over time.

Sue Yee (SIM #6) agreed that this was by far the most difficult game in SUniG 2016. “I felt that they [NTU] tested our mental strength and during the second half, a lot of us felt very tired,” she said.

Fatigue crept in as the second half progressed but the lack of goals in no way hinted at a boring half. Both NTU and SIM made good runs and passes but were simply unable to move the numerals on the scoreboard.

Then came a spell where SIM attacked non-stop within 5m of the touchdown line. With a moment of brilliance, A long pass to the right flank was caught and dived in for a touchdown. For a moment, everyone thought SIM scored, only for the referee to disallow the touchdown due to a forward pass. NTU’s resilient defending for that long spell had paid off.

The game seemed headed to end at 3-1, but just moments before the final whistle, Isadora Soh (#5) earned NTU’s second touchdown of the game.

The two teams will see each other again for the final on Monday, September 19. Both sides promise an entertaining display.

NTU captain Deborah Liu (#17) said, “It’s rare that we have a second chance, to play against the same team, SIM, to prove ourselves again. It’ll be an interesting match because we lost today but we are capable of more. We’ll see how each member rise up, and come together as a team on that day. Things should go well if we step up together.”

NTU vice-captain Jasveen Sidhu (#8) had the same spirit. “We don’t have to make major changes, more of fine-tuning things we already know. Just about doing the basics, doing it right and most of all, playing together.”

While NTU look for a comeback on Monday, SIM captain, Sue Yee, is wary of complacency. When asked about Monday’s final, she said, “Definitely, we will not be complacent, [we will] work hard and be better in our fitness, and mental strength coming Monday.”