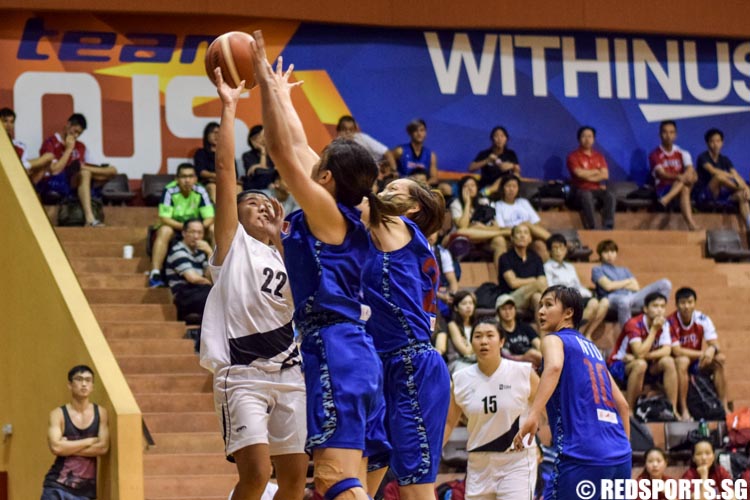 Amanda Lim (#9) of NTU led the game with 25 points. Her teammate Shermaine See (#7) came in after her with 20 points. Both of them netted four 3-pointers each in the game.

With this game, NTU registered their third consecutive win of the season, and will be facing Singapore Institute of Technology (SIT) next on Tuesday, September 13, at 8.30pm.

On the other hand, SIM suffered their first loss of the season, and drop to a 3–1 win-loss record. They will be playing their next game against SIT on Wednesday, September 14, at 8.30pm.

Both sides traded baskets, but NTU took a slight lead when Amanda Lim (#9) went on a scoring streak. Following Amelia’s two earlier on, Amanda scored a three, and then poured in eight points after to give NTU a 20–14 lead.

Two minutes into the second quarter, Zoe (#18) and Debbie Ngo’s (#10) chemistry play led to a completely undefended Debbie in the paint. Debbie scored the underbasket shot to start off the scoring for the quarter (16–20).

It was a relatively low-scoring second quarter as SIM’s consistent mistakes led to turnovers. It was not much better for NTU. Other than Yoshida Yukie’s (#21) 3-pointer, NTU’s outside shots were not falling.

SIM registered a 7–8 second quarter against NTU to trail 21–28 going into the second half.

However, NTU’s Shermaine (#7) was not to be overlooked, as she chalked up 10 points alone to counter her opponents.

“We were probably not physical enough, and not prepared enough for our opponents’ aggressiveness. I think we weren’t ready to take the aggression from them,” said SIM player, Priscilla (#13).

In the final quarter, Priscilla (#13) remained a key offensive player within the arc, putting in three points but it was not enough.

NTU’s Amanda (#9) was determined to fend off SIM’s attempts and poured in nine points to help NTU pull away to an eventual 64–46 win to continue their winning streak.

NTU captain, Shermaine See (#7), said, “It was still a tight game to me. It was just whether the ball fell in or not. That was the difference.”

“There were several times where there were turnovers that we shouldn’t have made, and some other mistakes in defence, but other than that, overall it’s still fine,” Shermaine continued.

Priscilla Han (SIM #13) said, “There’s still room for improvement. I think we can do a lot better. Pauline just recovered from her ACL injury. She has not been in action since December last year, and this is her first competition coming back into the scene.”

“Our goal will still be working towards winning champs in the IVP,” added Priscilla.