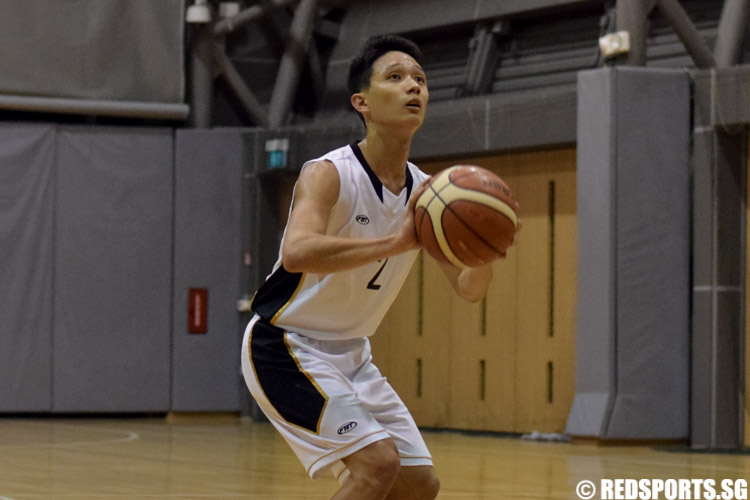 This game upped NTU’s win-loss record to 2–1. They will be playing Singapore Institute of Technology (SIT) next on Tuesday, September 13, at 8.30pm.

On the other hand, SUTD suffered their second loss this season to NTU after a defeat to National University of Singapore (NUS) last Tuesday. They will next be in action against Singapore Management University (SMU) on Wednesday, September 14, 8.30pm.

SUTD took the first 4–0 lead through Bryan Lim (#2) and Xing Bo (#15). NTU retaliated after, with Kua Hiong Yong (#10) netting two consecutive 3-pointers to take over the lead (6–4). With two minutes remaining in the first quarter, SUTD levelled at 12–12, but could not stop NTU from ending the quarter with a 16–14 lead.

Scoring eight unanswered points to start off the second quarter, NTU proved themselves to be the more dominant team with Tok Jian Sheng (#6) and Sean Hoo (#30) pacing the team on offense. NTU registered an impressive 22–2 run in the quarter to lead 38–16 going into the second half.

SUTD captain, Sun Peixuan (#14), said, “In the first quarter, I think that we played quite aggressively. We showed our plays and showed what we had practiced. However, in the second quarter we got tired and flustered. I think it showed that we are not as experienced as the other team.”

In the second half, Haonan (#7) was unable to cut his way into the paint following NTU’s tight defense, and chose to take outside shots instead. He sank two 3-pointers to register six points for the second half. Zhou Minglong (#9) and Bryan (#2) on the other hand, dished out well-placed passes to their teammates for scoring opportunities.

NTU’s Seah Ching Seng (#24) was the main scorer in the second half, dominant in the paint and also enjoyed good finishing. He registered 13 points in the third and fourth quarters to lead NTU to a 76–37 win over SUTD.

Commenting on the team’s performance, SUTD captain, Peixuan (#14) said, “I think we’re just slowly getting used to the momentum. In our first game against NUS, we were warming up and didn’t do so well. This game, I feel that we’re gradually getting the feeling.”

“Our defence is a little problematic. We’ll have to work on it in the next few days,” Peixuan added.