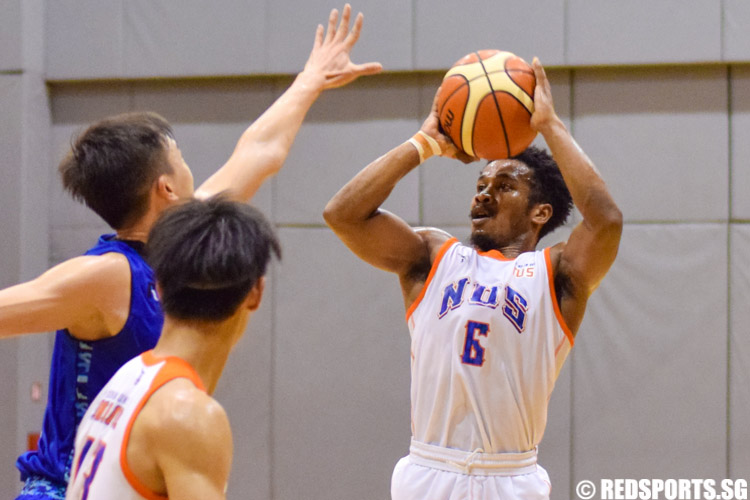 NTU previously went down by five points to Singapore Institute of Management (SIM) in their first game of the season, and currently hold a 1–1 win-loss record. They will be playing Singapore University of Technology and Design (SUTD) next on Friday, September 9, at 8.30pm.

NUS now have a 3–1 win-loss record after their only loss so far to NTU. They will be playing SIM next on Tuesday, September 13, at 8.30pm.

NTU started off their game strong on defence, with Russel Low (#32) shutting down NUS’ offense in the paint. The team’s diligent defence also forced NUS to take their chances outside the perimeter. Plagued with shooting woes, however, NUS were unable to convert and played a flustered offensive game throughout the first quarter.

Justin Lim (NTU #26) opened the scoring for the game after receiving a well-placed pass from teammate Anton Andersson (#4). Sinking two 3-pointers and a two, Sean Hoo (#30) subsequently led NTU to a 17–0 lead.

NUS were still scoreless with one minute to go, but finally found a response in Chan Wai Hon (#7), who made it 2–17 just before the first quarter ended.

Forcing a turnover early into the second quarter, NTU’s Tan Zhi Sen (#14) took the chance to drive in for a two. He then registered another defensive rebound, and went on to add two more points to the scoreboard. Teammate Tok Jian Sheng (#6) was also on a streak, scoring five consecutive points to keep NTU’s lead healthy.

NUS only scored towards the end of the second quarter. Rolu Oyekanmi (#6) sank a three and scored another two on the following offense. Clement Chan (#13) too added to the scoreboard, putting in a two-point effort to freeze the second quarter at 9–28.

On the team’s dominant first-half display, NTU captain Sean Hoo (#30) said, “First off, credits to NUS, they are a strong team but they just didn’t make their shots today. Our first half, we really hustled hard on defence and held them to two points in the first quarter.”

“In the second quarter, I think they were nine. We’re a very tall, very big team, and we’re also very long, so we just had to make use of our advantages. We needed to just use our length, and that’s what we did today. That’s how we managed to hold them to so few points,” continued Sean.

In the second half of the game, NUS seemed to have found their offensive momentum with Rolu’s (#6) sharpshooting. Rolu took well-set screens from his teammates to go for undefended shots, registering seven points and six points alone in the third and fourth quarters respectively. Clement (#13) also stepped up his offensive game with six points in the second half.

On NUS’ relatively stronger second half, vice-captain Thomas (#21) said, “A lot of the third quarter sparks came from Rolu. I think a lot of them were affected by Russel from the other team in the beginning. Russel is a very good shot-blocker, which is why a lot of us have to adjust the way we play, and we only managed to do that in the later half of the game.”

Despite a much-improved second-half game, it was not enough to overcome the deficit as NUS eventually went down 32–61 to suffer their first loss of the season.

On their chances of qualifying for the Institute-Varsity-Polytechnic (IVP) Games, Sean (NTU #30) said, “I think that as long as we do what we need to do, as long as we play hard like how we played today, we stick to our game plan and we continue to work hard, we should qualify. I have faith in my teammates. We should be able to do it.”