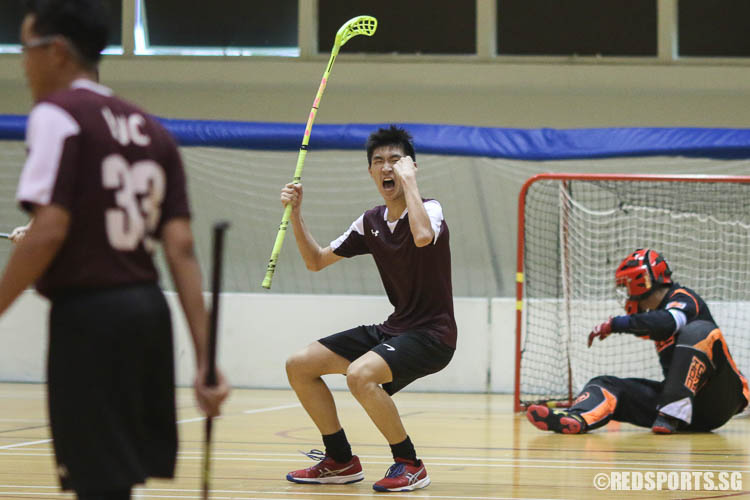 Koh Dun Xian (VJC #5) snatched a hat-trick to rocket his team to victory in the third/fourth placing match.

After being knocked out of the title race by Meridian Junior College and Raffles Institution two days ago, the two teams were pitted against each other in a contest for the bronze medal.

VJC entered this game as the slight favourites after they finished the preliminary round with 15 points as opposed to ACJC’s 13 points.

VJC could not have started the game better when Koh Dun Xian (VJC #5) put the ball into the back of the net within the first minute. VJC stole a march on their opponents as ACJC found themselves pegged back right at the beginning.

ACJC responded with attacks of their own as Lai Wei Jian (ACJC #4) and Shannon Lee (ACJC #6) were both denied by the VJC goalkeeper.

Koh Dun Xian (VJC #5) displayed stellar shooting ability when he scored a dragged shot from the right flank. This extended VJC’s lead to two goals after just four minutes of play, as they threatened to punish ACJC.

ACJC ventured forward in a bid to reduce the deficit, but were constantly halted by their poor finishing.

Samuel Ho (ACJC #5) had a mid-court shot that hit the bar before Cheng Wei Qiang (ACJC #10) delivered a corner pass to Nicholas Koh (ACJC #7) who slotted the ball into the bottom right of the goal to reduce the deficit to one goal at the end of the first period.

The second period began with both teams fast out of the blocks. They took turns to attack, but lacked the finishing touch to make their efforts count.

ACJC increased the pace of the game as they looked to go back on level terms. With the rising pressure, VJC tweaked their game plan as they tried to hurt ACJC with more long balls and direct play.

The third period got under way in similar high tempo fashion. Shannon Lee (ACJC #6) made a swift turn to break away from his marker, before shooting the ball straight at the goalkeeper.

Koh Dun Xian (VJC #5) then completed his hat-trick when he received the ball in the centre of the D, and flicked his shot into the top left corner of the goal, making it 3-1 to VJC. This inflicted a heavy blow on the morale of the ACJC squad as VJC inched closer to victory.

A minute later, Poon Chong Ming (VJC #9) effectively ended the game after taking a shot from near the halfway line. ACJC goalkeeper Joshua Loh (ACJC #1) got his fingertips to the ball but could not stop it from sneaking into the goal.

With the game at 4-1, VJC were in cruise control. However, the ACJC players showed great resolve, as they continued to try and narrow the scoreline.

The high-intensity game eventually ended with VJC emerging 4-1 victors to be bronze medalists of the championship.

VJC captain Muhammad Haziq (VJC #23) commented after the game, “The game was very intense, we decided to play a full court press after seeing ACJC play a half-court press in the semi-finals. We did some tactical changes. It paid off in the first few minutes, but in the second and third period they countered us. So we had some trouble carrying on with our gameplay. At first, we were a little shaken, but got together and stood our ground.”

On whether the team was planning to hold on to their lead when the game was 2-1 in their favour, he said, “We never planned on slowing the game, we changed our play to a long ball tactic for a higher chance to score more goals.”

In a message to his teammates, Haziq said, “Most of them just started playing recently, so they should not be disheartened by the third place finish. All in all, it is not just about winning, it is about playing together as a team.”